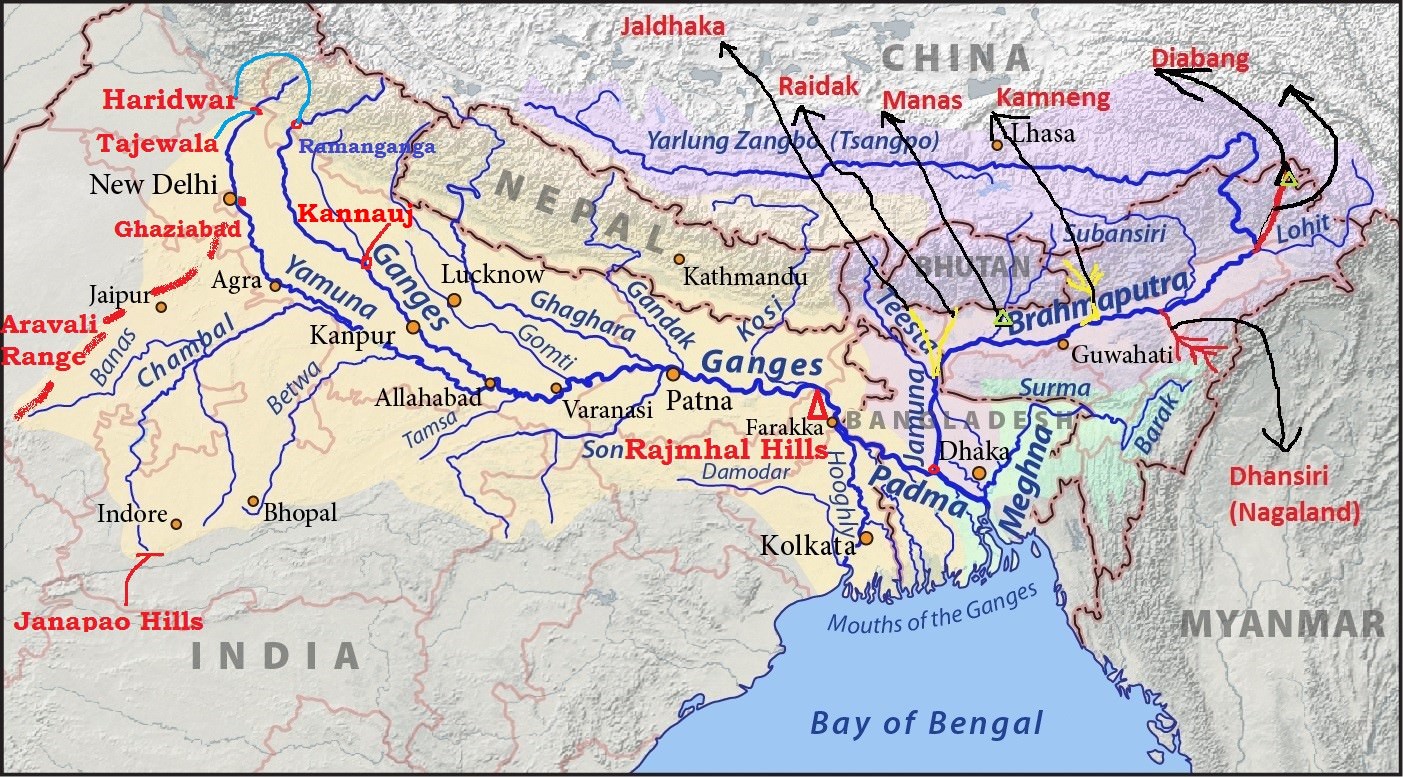 This river system includes the Ganga and its tributaries like the Yamuna, the Gomati, the Ghaghara, the Gandak, the Ramganga, the Mahaganga and the Kosi, etc. All these rivers originate in the Himalayas.

The Ganga rises in Garhwal Himalayas in Uttarakhand at an altitude of 6,600 metres. The river acquires its name after its head-streams–Alaknanda and Bhagir athi unite at Devaprayag. Flowing west south-westwards the Ganga debouches from the hills near Haridwar. The total length of the Ganga is 2,525 kms, out of which 2,415 km is in India. Rest of the Ganga measuring 110 km is in Bangladesh. The total area of the Ganga basin in India alone is 8,61,404 sq kms. Beyond Farakka, it flows east-south-eastward into Bangladesh where it is known as Padma. Before falling into Bay of Bengal, the Padma receives the Brahmaputra which is known as Jamuna and Meghna here.

It is the right-bank tributary of the Ganga and it takes its rise at the Yamunotri Glacier at 3,965 m. After cutting a deep gorge across the Lesser Himalaya, it flows towards the south-west and enters the Ganga Plain near Tajewala. It flows towards the south upto Agra and further down in the south-east direction till it joins the Ganga at Allahabad. The length of Yamuna from its source to Allahabad is about 1,375 kms.

The Ghaghara’s head-water is the Karnali. It is of trans-Himalayan origin and crosses the western part of the Nepal Himalayas through deep and narrow gorges. It joins the Ganga near Chhapra. It often shifts course.

It rises near Sino-Nepal boundary and drains the central part of Nepal. After entering Champaran district of Bihar, it turns to the south-east and joins the lebank of the Ganga at Sonpur. Like the Ghaghara, it often changes its course and is notorious for its floods.

It drains eastern Nepal and enters Saharsa district of Bihar in numerous channels. The river is notorious for shifting its course, depositing silt and causing floods. It joins the le bank of the Ganga at Karagola.

It originates from Chemayungdung Glacier located about 100 kms south-east of Manasarowar Lake. It runs for about a distance of about 1,250 kms in the north of Himalayas in a direction parallel to it. It is known as Tsang Po in Tibet. It takes a southward turn near Namcha Barwa and enters Arunachal Pradesh as Dihang river. It flows in a westerly dire ction upto Dhubri. After this, it takes a southern turn and enters Bangladesh. There it joins with Ganga and forms the world’s largest delta. Like the Indus, it is an example of antecedent drainage. Its total length is 2,900 kms. Several tributaries join this river. Important right bank tributaries are Sabansiri, Bhareli, Manas and le-hand tributaries are Dibang, Luhit, Burhi Dihing and Dhansiri. These tributaries bring a large quantity of water and the Brahmaputra channel becomes 8 km wide during rainy season. It causes frequent floods.