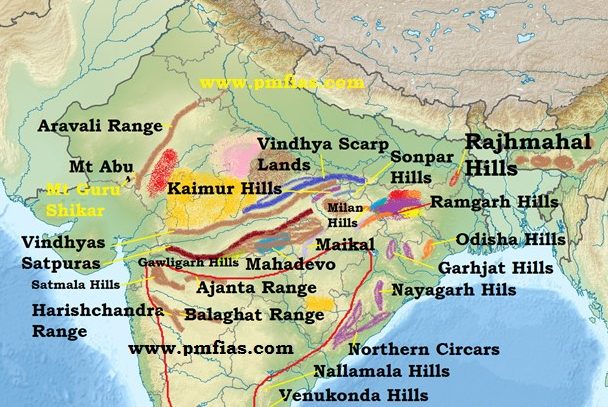 The Peninsular Plateau of India forms an irregular triangle whose base lies between Delhi Ridge and the Rajmahal Hills and its apex is formed by Kanniyakumari. Ths is the oldest landmass of India whose general elevation is 600-900 metres. It is surrounded by hills on all the three sides. In the north are the Aravalis, the Vindhyachal and the Rajmahal hills. Its eastern and western sides are represented by Eastern Ghats and Western Ghats respectively. This vast plateau is 1,600 kms long in north-south direction and 1,400 kms wide in east-west direction. The Narmada-Tapi Trough divides this great plateau into following two parts:

The triangular portion lying north-west of Narmada-Tapi rivers and the Vindhyachal Range is known as the Malwa Plateau. To its north-west are the Aravali Hills and to the north-east is the Ganga Plain. This is composed of hard rocks like granite and is generally 800 metres above sea-level. Its normal slope is towards north-east. The Chambal river has cut deep ravines and gullies and the Betwa rivers wing through this part of the plateau is usually termed as badland. This is not for cultivation. The further extensions of this plateau are the Bundelkhand, the Ruhelkhand and the Chotanagpur Plateau.

The Aravali western and the north-western bank of the plateau is occupied by the Aravalis, relict mountain range much denuded and forming discontinuous ridges. The Aravalis run for a distance of about 800 kms from Ahmedabad to Delhi. It reaches its maximum height of 1,722 m. at Guru Shikhar in Mt. Abu. Having a north-east to south-west axis, the Aravalis form discontinuous ridges between Gujarat and Delhi. The main hills lie in Rajasthan having an imposing relief south-west of Ajmer. However, they fan out in parallel senes of low ridges, north-east of Jaipur towards Haryana to the west of Aravali. Range lies the sandy waste of the Desert. This is an area of arid topography with a vast expanse of creascent shaped sand dunes called Barkhans.

This is again a triangular plateau located in the south of river Tapi. Its north-west boundary is demarcated by the Satpura and Vindhyachal ranges while its northern border is ranked by the Mahadev and the Makala ranges. Its western and eastern anks are represented by the Western Ghats and the Eastern Ghats respectively. Its average altitude is 600 metres although it rises to 1,000 metres in the south and slopes down to 500 metres in the north. This plateau covers an area of about two lakh sq. The general slope of this plateau is from west to east, that is why most of the rivers of the plateau flow from west to east. The Narmada and the Tapi are the two exceptions which w from east to west. The rivers wing through this plateau have cut broad valleys and hour divided the plateau into several smaller plateaus such as the Maharashtra Plateau, the Andhara Plateau and the Karnataka Plateau.

The Sahyadries or the Western Ghats

It extends from the Tapi river in the north to Kanniyakumari in the south and forms the western boundary of the Deccan Plateau. Its total length is 1,600 kms and its width varies from 50 kms in the north to nearly 80 kms in the south. Its average altitude is about 900-1,100 metres above sea-level. It forms almost a continuous wall and can be crossed only through gaps. These gaps are the lghat, Bhorghat, Palghat and the Shencottah gap. These gaps are used by rail routes. The Palghat provides rail link between Mumbai, and Kolkata. The Mumbai–Chennai railway line passes the rough the Bhorghat and the Palghat is used by the Kochi-Chennai railway line. The western slope of this mountain is like a staircase (ghats) which gives it the name of ghats. The southern part of the western Ghats is characterised by the presence of the Nilgiri, the Anamalai and the Cardamom Hills. The Anai Mudi (2,695 metres) and the Doda Betta (2,637 metres) are two important peaks of these hills.

Skirting the eastern edge of the Deccan plateau and running parallel to the eastern coast are the Eastern Ghats. This range extends from the north-eastern part of Odisha and reaches Nilgiri hills in the south. It is about 200 km. wide in the north and narrows down to 100 km in the south. Its average height is about 600 metres which is lower than that of the Western Ghats. Rivers Mahanadi, Godavari, Krishna and Cauvery have cut through this range to reach the Bay of Bengal. Thus, it is a residual range and does not depict the real characteristics of a mountain except between Mahanadi and Godavari. It is known by different names in different parts. Nallamalais, Velikondas, Palkondas and Panchmalais are important names. In the south, the Eastern Ghats merge with the Western Ghats near the Nilgiri hills. The islands extend from 60 to 100 km, forming a cluster south of the Andaman group. They are fairly large and more numerous than the Lakshadweeps. Some of the islands are of volcanic origin. Barren island is an active volcano. The Lakshadweeps extend just to the north of the independent country known as the Maldives.

The Great Plateau is ranked by narrow coastal strips on both western and eastern sides along the Arabian Sea and the Bay of Bengal respectively. These are commonly known as the West Coastal Plain and the East Coastal Plain.

The West Coastal Plain lies between the Western Ghats and the Arabian Sea coast and spreads from Gujarat to the Kanniyakumari. It is a narrow plain with an average width of 64 km. It goes on narrowing as we move from north to south. e plain is divided into three parts. The northern part from Mumbai to Goa is called Konkan, the middle part is called the Kannad Plain while the southern part upto Kanniyakumari is known as the Malabar Plain. Konkan is 50-80 kms wide and characterised with estuaries while Malabar is characterised with lagoons and back waters. Lagoons are salt water lakes, separated from the main sea by sand bars and spits. Vembanad lake is an important lagoon. Kochi is located on this lagoon.

Along the Bay of Bengal, there extends a comparatively wide and level plain from Odisha to the Kanniyakumari known as the East Coastal Plain. It becomes broader in Tamil Nadu where it is 100-200 km wide. It narrows down in the north of Godavari where it is only 32 kms wide. It has two parts– the northern and southern. e northern part between the Mahanadi and the Krishna is North Circar Plain and the southern part between the Krishna and the Cauvery is Coromandel or Carnatic Plain. The Mahanadi, the Godavari, the Krishna and the Cauvery are major rivers which originate from the great plateau and form deltas at their mouths. A chain of bars is found along the coast that has given birth to numerous lagoons. The Chilka and the Pulicat present good example of lagoons.

Besides mainland, Indian territory also extends into the Arabian Sea and the Bay of Bengal in the form of the Lakshadweep and the Andaman and Nicobar Islands respectively. The Lakshadweeps are small coral islands and none of them is more than a couple of square kilometres in area. The Andamans and Nicobars are also a cluster of islands stretched almost in a line. There are as many as 200 islands in the Andaman group alone, extending for 350 kilometres. There are 19 islands in the Nicobar group.