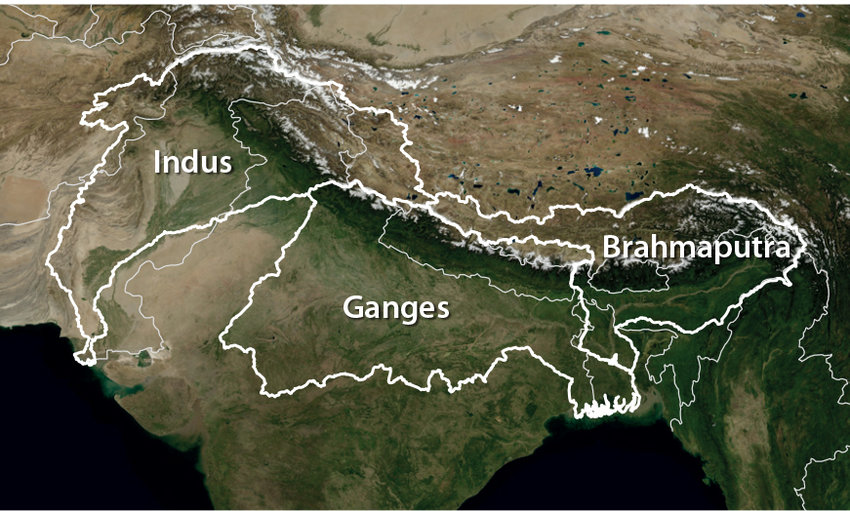 Lesser or the Middle Himalayas

This is located in the south of the Great Himalayas and runs parallel to it in the east-west direction. Its average height is from 3,700 to 4,500 metres and it is nearly 80 kms wide on an average. Its important branches are the Pir Panjal and the Dhaola Dhar. In between the Greater Himalayas and the lesser Himalayas, there are longitudinal valleys. The beautiful Kashmi r valley and the Kathmandu valley are outstanding examples. Most of the hill resorts such as Shimla, Mussoorie, Dalhousie, Nainital, Darjeeling, etc. are located on this range.

The southernmost range of the Himalayas is the Shiwalik range whose height varies from 900 to 1,200 metres. Its width varies from 10 to 50 Kms. In between the Lesser Himalayas and the Outer Himalayas, there are longitudinal valleys known as ‘duns’ in the west and ‘duars’ in the east. Dehra Dun, Kothari Dun and Patli Dun are the important examples. O-shoots of the Himalayas. The general east-west axis takes sudden bend which is comparable to hair-pin. These bends are marked by the Indus gorge in the west and the Dihang gorge in the east. There is a difference of opinion regarding the actual limit of the Himalayas. One view is that the Himalayas terminate with these great bends while the other view is that these mountains extend further southwards from these points. Accordingly following two sets of offshoots of the Himalayas are recognised:

These offshoots include the mountain ranges lying beyond the Indus. They are the Hazara, the Sulaiman, the Bugti, the Kirthar and the Mekran ranges.

This section of the Himalayas lies beyond the gorge of Tsangpo-Brahmaputra. s includes the Indo-Myanmar hills, the Arakan Yoma and he Tenasserim ranges. These are treated as projections of the Himalayas. Most of these ohoots are located out of India. The Indian section of these offshoots include the Naga, the Patkai, and the Mizo hills (previously known as Lusai Hills). To the north-west of Ladakh is the Karakoram Range having an average altitude of 6,000 metres. The highest peak of this mountain range is K² or Gadwin Austin (8,611 m). This is also the highest peak of India. Karakoram pass at 5,575 m provides important passage between India and the Tarim basin.

The Great Plain of north India has been formed by the depositional work mainly of rivers, the Indus, the Ganga and the Brahmaputra and is often termed as Indus-Ganga-Brahmaputra Plain. The plain extends for 2,400 kilometres in east-west direction from Satluj to Ganga delta, all along the foot of the mountains, with a width varying from 150 to 300 kilometres. The plain is narrowest in Assam varying between 90 and 100 kilometres. It is 160 kms wide near Rajmahal Hills and 280 kms near Allahabad. As mentioned earlier, this great plain is the result of the initial depression by continuous depositional work done by the Himalayan rivers.

Relief Features of the Plain

Depending upon the differences in the surface relief, the plain is divided into following four divisions:

It lies along the foot of Shiwaliks from the Indus to the Tista. It is a narrow belt 8 to 16 kms wide comprising of pebble-studded rocks in the shape of porus beds. These beds are laid down by streams coming from the hills. The porosity of this zone is so high that all streams disappear here. The pebbled beds are usually parallel to the slope of the river beds. This is not much suited for agriculture.

It is situated to the south of Bhabar and runs parallel to it. It is marked by the re-emergence of the underground streams of the Bhabar belt. The alluvium deposited here is greater than that deposited in the Bhabar. It is an area of excessive dampness. Large stretches are marshy areas due to re-emergence of underground streams and forest with a variety of wild life are found here. Most of the Tarai land has been reclaimed and turned into agricultural land.

It is composed of old alluvium and forms the alluvial terrace above the level of the flood plains. It is oen impregnated with calcareous concretions known as kankar.

The flood plain which has newer alluvium is called Khadar. A new layer of alluvium is deposited by river floods almost every year. The Khadar is often characterised with fertile soil and intensive agriculture.