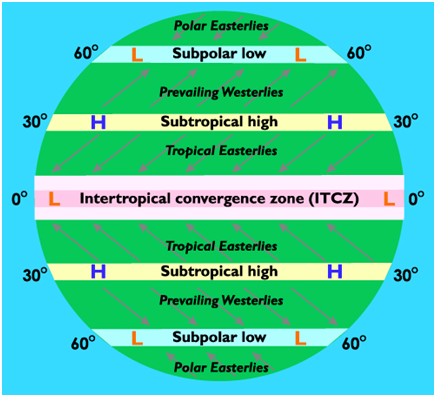 The air present in the atmosphere has its own weight and it exerts pressure on the surface of the earth. The pressure exerted by atmosphere is known as atmospheric pressure. It is the weight of column of air at any given place and time. It is measured with the help of a barometer. Under normal conditions, it is equal to the weight of a column of mercury 76 cm or 760 mm high at sea-level. Meteorologists measure atmospheric pressure in milli bars (mb). One millibar is equal to the force of one gram on a square centimetre. The normal pressure of 76 cm at sea-level is equal to 1013.25 millibars. Atmospheric pressure is measured with the help of instruments like Fortins barometer, aneroid barometer, and barograph. Distribution of pressure on the map is shown by isobars.

The atmospheric pressure is a very important factor in meteorology. Variations in the atmospheric pressure are responsible for horizontal movements of air called winds. Winds transport heat and moisture from one place to another and help in the occurrence of precipitation and influence both temperature and humidity. In addition, different climate types and regions are characterized by distinctive pressure and wind conditions.

This is a low pressure belt which extends upto 10° N and S of equator. Low pressure prevails there due to high temperature, high water vapour content in the air and maximum speed of the earth’s rotation at the equator. Surface winds are generally absent since winds approaching this belt begin to rise near its margin. Thus, only vertical currents are found. is belt is also called the doldrums because of the extremely calm air movements.

These belts extend from near the tropics to about 35° N and 35° S. These belts in the northern and the southern hemispheres occur due to descent of cold air from high altitude. The descending air creates a calm condition with variable and feeble winds in these high pressure belts. They are, therefore, called ‘Belts of Calm’ or ‘Horse Latitude’. In early days, the sailing vessels with the cargo of horse found it very difficult to sail under such calm conditions. They used to throw horses in the sea to make their vessels light.

The sub-polar lows are located between 45° N and S to the Arctic and Antarctic circles respectively. These belts are formed due to rotation of the earth. The axial rotation of the earth should blow away air from the poles and should cause low pressure at the poles but the poles are very cold and the effect of axial rotation in displacing air is felt near the Arctic and Antarctic circles and low pressure belts are formed in the sub-polar areas.