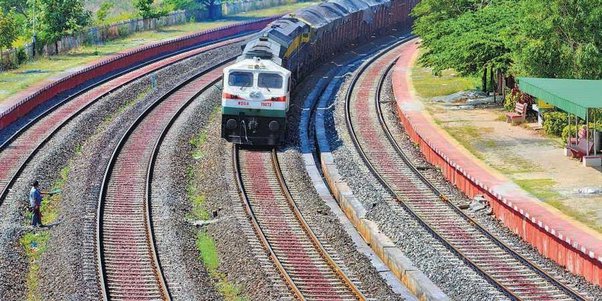 The pattern of Indian railway network has been influenced by geographical, political and economic factors.

The Northern Indian plain with its level land, high density of population and rich agriculture present the most favourable conditions for the development of railways. However, the presence of a large number of rivers makes it necessary to construct bridges which involves heavy expenditure. There are practically no railways in the flood plains of many rivers in Bihar and Assam. The plateau region of south India is not as much suitable for railways as the north plain area. The Himalayan region in the north is almost entirely devoid of railways due to its rugged topography. Some railway terminals such as Katra, Kotdwar, Dehradun, Kathgodam, etc. are found on the foothills. Some narrow gauge tracks are found in the Himalayan region.

Kalka to Shimla and Siliguri to Darjeeling are some of the important narrow-gauge railways in the Himalayan region. A 292-km long railway line between Jammu and Baramule in Kashmir Valley has been completed at very high cost. The sandy areas of Rajasthan are also not much favourable for railways. There was no railway line between Jodhpur and Jaisalmer till 1966. Similarly, forested areas of Madhya Pradesh and Odisha, deltaic swamps of West Bengal, marshy areas of Rann of Katch and hilly tract of Sahyadri are also unfavourable for the development of railways. Sahyadri can only be crossed through gaps like al Ghat, Bhor Ghat and Pal Ghat to reach coastal rail heads like Mumbai, Vasco-de-Gama, Mangalore and Kochi.

Railways develop more in the economically advanced areas where the need for railway network is felt more. Conversely, railways bring economic prosperity to the areas through which they pass.

The direction and pattern of railway lines was influenced by the policy of British administration before independence of India. The colonial policy of plunder and exploitation was responsible for connecting the port cities chiefly with big regional centres of production in the interior. The British rulers planned the suction mechanism in such as way that surplus production from villages reached the small towns and sub-regional centres. From there, it was brought to the big towns which were connected with the ports by railway lines. In this way, the whole hinterland got connected with the ports. The other hurdle in uniform distribution of rail tracks was the presence of enclaves ruled by other foreign powers like France and Portugal. Besides, there were autonomous princely states which managed their own transportation system. They put physical hindrance in the development of an integrated and unified transportational network.

A 66 km. long railway line was thrown open to tract in October 2008 in Kashmir Valley connecting Anantnag with Nowgam via Srinagar. This has ushered in new era of development in the Kashmir Valley. Portion between Banibal and Srinagar was thrown open to tract on 25th Jan. 2013. This railway route passes through 11km long tunnel through per Punjab Range. This is the longest tonnel of India and second longest tunnel of Asia after wushaoling tunnel (20 km) in Gansu (China).