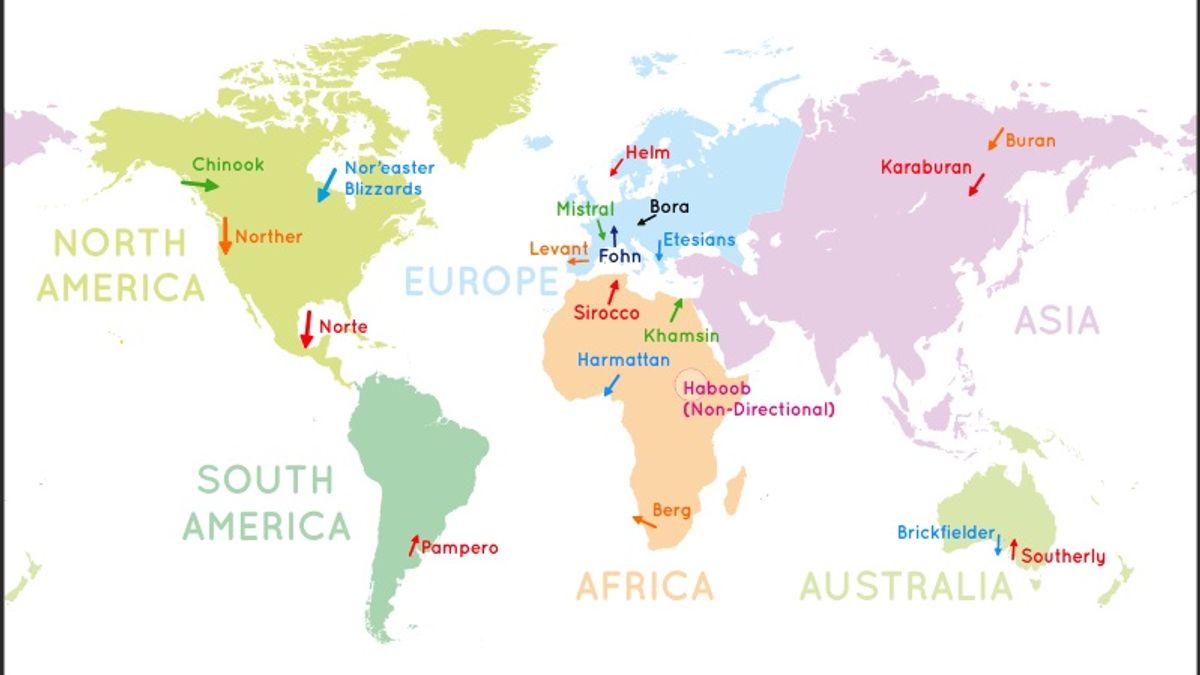 These winds blow due to local differences in temperature and measure and affect only small areas. Foehn is a strong, gusty, dry and warm wind which develops on the leeward side of the Alps mountain. Due to regional pressure gradient, stable air is forced to cross the barrier. Ascending air sometimes causes the precipitation on the mountains and descends on the leeward. It becomes warm and dry. e temperature of the wind is from 15° to 20°C. The wind helps animal grazing by melting snow and hasten the ripening of grapes.

Winds similar to Foehn blow down the eastern slopes of Rockies in the USA and Canada. These are known as Chinooks. The world Chinook literally means snow-eater. It is beneficial to ranchers of the Great Plain of North America and east of the Rockies as it keeps the grasslands clear from snow during much of the winter. In spring, it can cause a sudden rise in temperature, by as much as 22° C in just three hours. Mistral wind blows from the Alps over France towards the Mediterranean Sea through the Rhone Valley. Harmattan is a dry hot and strong north-easterly wind blowing from Sahara desert towards Gulf of Guinea. Harmattan which means ‘Doctor’ is the local name given to it. e climate of Guinea is quite hot, humid and oppressive. The Harmattan gives a welcome relief to the people and hence the name ‘Doctor’.

Sirocco is a hot, dusty and dry wind which blows in northerly direction from the Sahara desert and reaches Italy, Malta and Sicily after crossing the Mediterranean Sea. It picks up moisture from the Mediterranean Sea and becomes humid and oppressive wind causing discomfort to the people and becomes harmful for agriculture. On reaching the southern part of Italy, the moisture laden sirocco causes rainfall. s rainfall is called ‘blood rain’ because it is accompanied by red sand drawn from the Sahara desert. It is known by different names in different parts of North Africa and South Europe. For example, it known as khamsin in Egypt, gibli in Libya, chili in Tunizia, leveche in south-eastern Spain and simoom in the Arabian desert.

Khamosin is an Arabic word which means fifty. Since this wind blows for about fifty days from April to June, it is aptly called knamosin.

Another wind from the Sahara desert blows towards the Iberian Peninsula and is known as Solano. Karaburan is a strong dust-laden N.E. wind which blows in Tarim Basin of Xinjiang (China) in the Central Asia. Brickfield is a hot and dry wind which blows from north to south from the interior of Australia to the south-east coastlands in Victoria and south-eastern parts of New South Wales. Loo is a very hot, dry and dust laden wind which blows particularly over north-west India during the summer season extending from April to June. Rajasthan, Haryana, Punjab, Gujarat, Uttar Pradesh and Western parts of Madhya Pradesh are particularly affect by loo.

Blizzard is a very strong, bitterly cold wind. Intense blizzard reduces the visibility to almost zero. e term was derived from N.W. gales experienced in U.S.A. in winter, but now it is used widely for all such phenomena, especially in Antarctica. In Canada and northern parts of U.S.A., it often disturbs the calm of the winter anticyclone. It is most dangerous over open prairies of North America. Bora (Latin boreas,–the north wind) is a bitterly cold, dry, gusty, squally, wind blowing violently down the mountains from north or north-east into North Adriatic Sea. Friagem (Suraze) is a cold strong wind, experienced in winter of the southern hemisphere, on the campos of Brazil and in East Bolivia. A strong blustery north-east wind, accompanied by showers in the Central Mediterranean Sea is known as gregale. It is sometimes called the Greco. Buran is strong north-easterly wind experienced in Central Asia and Siberia in all seasons though occurring particularly, bitterly cold blizzard in winter (corresponding to the Canadian blizzard). Also termed as purga in winter, Buran reaches a gale force, often blowing at temperature as low as –30°C or even below.

Nevados or Nevadas is a cold down-valley wind blowing from the Andean snow-fields to the high valleys of Ecuador.

Norther is a cold dry polar wind which sweeps down the middle of North American continent towards the Gulf coast states in winter. Pampro is a Spanish word used for a dry, bitterly cold wind bringing low temperatures in winter of southern hemisphere, to parts ofArgentina and Uruguay. Southerly Buster is a strong, cold, dry polar wind which originates in the Antarctic continent and flows northwards reaching Victoria and New South Wales states of Australia. Norwester has different meaning in New Zealand and India. In New Zealand, norwester is a fohn type of wind blowing from the New Zealand Alps across the South Island. In India, the thunderstorms of West Bengal and the adjoining areas of Bihar, Jharkhand, Odissa, Assam and large parts of Bangladesh are known as norwesters. The squalls come predominantly from the northwest and hence the name ‘norwester’, though they can come from other directions as well. They commence mainly in the month of Vaisakha (mid-March to mid-April) and are extremely destructive and hence qualified by the term ‘Kal-Baisakhi. Since it comes at the time of ripening of mangoes, it is also known as ‘mango-showers’. Samoon or Samun is Persian term applied to a warm, dry wind descending from the highlands of Kurdistan. Santa Ana is a hot, dry wind blowing from north and north-east descending from Sierra Navada across the desert of South California (U.S.A.). Simoon is an Arabic term used for a very hot, swirling, intensely dry sand laden wind which is experienced in north Sahara in summer