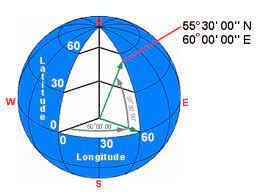 Graticule is the network of parallels and meridians drawn on a globe. This network helps us in locating dierent places with reference to given latitudes and longitudes. Supposing (Figure 2.5), we say that the latitude of a place A is 45° N and its longitude is 45° W. Then its geometrical position will be at the intersection of 45° north parallel and 45° W meridian. Similarly, point B is 30° S latitude and 30° E longitude.

There are some parallels which are more important than the others. The equator divides the globe into two equal sized-northern and southern hemispheres. This is the longest of all the parallels and is known as the latitude of 0°. This is the basic latitude and all other latitudes are expressed with reference to equator. We know that the earth’s axis is inclined at an angle of 23.5° to its orbital plane. Therefore, 23.5° is the maximum latitude up to which sun’s rays can be perpendicular at any place. Thus 23.5° north and south latitudes have special signi cance. Thparallel of 23.5° north latitude is known as the Tropic of Cancer and that of 23.5° south latitude is called the Tropic of Capricorn.

Motions of the Earth and their Effects

The Earth has two motions, namely rotation around its own axis and revolution around the sun.

The earth rotates around its axis from west to east, i.e., in anticlockwise direction and completes one rotation in about 24 hours (precisely in 23 hours 56 minutes and 4 seconds). The axis of the earth is an imaginary line passing through the centre of the earth and joining north and south poles. It is tilted at an angle of about 66½° to the plane of the elliptic, i.e., at an angle of about 23½° from the line perpendicular to that plane. The velocity of rotation decreases from equator to poles because the length of parallels also decreases as we move from the equator toward the poles. It is 1700 km per hour at the equator, 850 km per hour at 60° N and S parallels and zero at the poles.

The earth’s rotation has a large number of effects on our everyday life. The main effects are:

Revolution of the earth has the following effects:

Seasons come and go, one after the other, in a rhythmic fashion, with almost a clockwise precision. Following four factors are responsible for change of seasons: