Important Minerals of the World 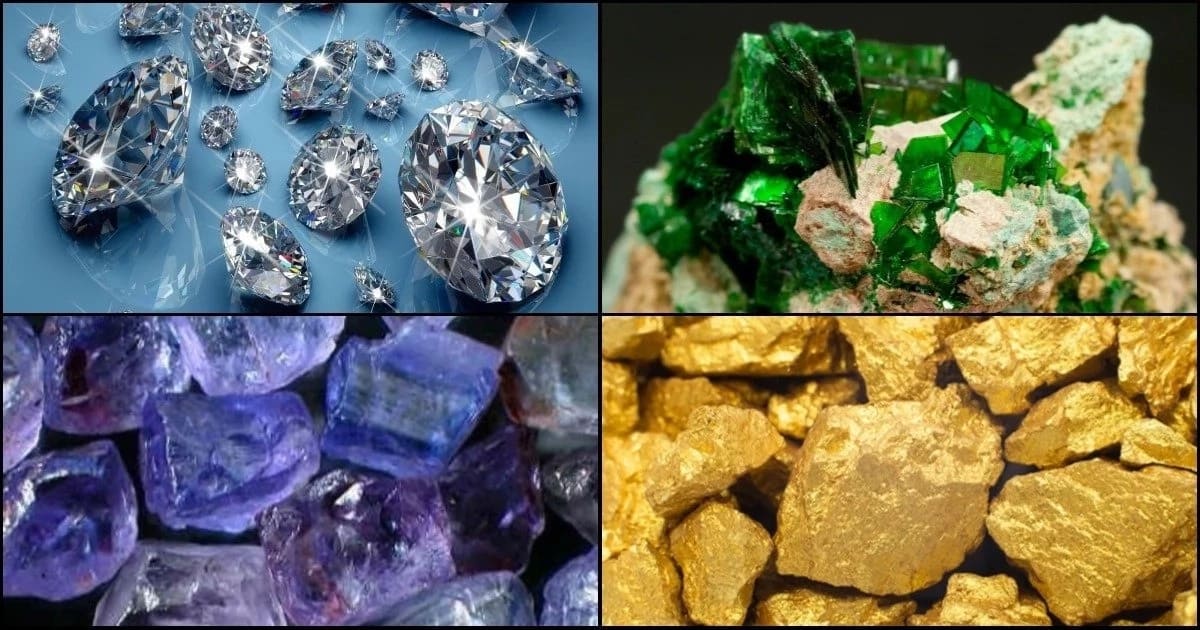 Iron ore is the backbone of modern civilisation. It is the foundation of our basic industry. Today, iron ore is used all over the world. The standard of living of the people of a country is judged by the consumption of iron. Iron is taken out from the mines in the form of iron ore which contains varying percentage of iron. Four varieties of iron ore are generally recognised

Siderite is of inferior quality which contains many impurities and has only 40-50% pure iron. The leading producers of iron ore are China, Australia, Brazil, India, Russia, Ukraine, South Africa and U.S.A.

Manganese is used in iron and steel industry. About 6 kg manganese is used for making one ton of steel. It is also used for manufacturing bleaching powder, insecticides, paints, batteries and china clay. China, South Africa, Australia, Brazil, Gabon, Kazakhistan and India are major producers.

Copper is an important industrial metal because it is corrosion-resistent, a good conductor of electricity and a ductile as well as malleable metal. Hence it is used for a variety of products such as power cables, electrical equipment, automobiles, radiators, refrigerators, pipes, utensils, coins etc. In fact copper was the first metal to be used by man and it is being used for the last ten thousand years. Chile has about 30% of the world’s copper deposits. Chile, U.S.A., Peru, China, Australia, Indonesia, Russia, Canada, Zambia are the main producers.

These two metals generally occur in combination with other elements. Galena, a combination of lead and sulphur is the principal ore of lead. Galena contains 86% of metallic lead and occurs in regular cube crystals. The major zinc material is sphalerite which is a combination of zinc and sulphur. Zinc content of the ore is generally between 2 to 12 per cent. Lead is valuable due to its soness, melleability and re sistance to corrosion. Zinc is highly valuable due of its ability to make alloys and its resistance to oxidation. The chief use of zinc is for galvanizing or cooling iron and steel and is used to make it resistent to rust. The major producers of lead are the U.S.A.,

Bronze Age came into being because of tin. It is a sometal and has low melting point. Also it is resistant to oxidation and corrosion. Casserite or tinstone is the principal mineral (ore) which usually contains 75% of tin. China, Indonesia, Peru, Brazil, Malaysia and Bolivia are the chief producers.

It is the only metal which occurs in liquid form. e chief producers are Spain, China and Itlay.

It is a non-metallic mineral which occurs in crystals of varying sizes. Mica is a bad conductor of heat and electricity and makes an ideal electrical insulator. It is widely used in electrical industry and till now, no substitute has been found to mica. India is the largest producer and exporter of mica in the world. U.S.A, Canada, Argentina and Brazil are the other producers.

It is a brous mineral which is used for manufacturing heat resistant sheets. Canada, Zimbabwe, Zambia and South Africa are the chief producers.

Tungsten has become very important metal due to its toughness, strength, hardness, and resistance to abrasion. It is almost indispensable in modern metallurgy. China, Democratic Republic of Korea, Russia and Bolivia are the leading producers.

It is a non-metallic mineral which is used in chemical industry. The main producers of sulphur are Mexico, U.S.A. and Poland.

This metal is used for making steel of high quality. South Africa and Russia are the main producers.

Gold is a precious metal which occurs in alluvial or placer deposits or as reefs or lobes underground. It has been considered as an international currency for a pretty long time. Gold is used extensively for jewellery and some gold is used in dentistry, in making glass and porcelain, in dyes, in medicine and other industries. South Africa (Witwatersrand, Odendoalrus and Lydenburg), U.S.A., Australia, China, Canada and Japan are the leading producers.

Silver is also a precious metal, though much less than gold. It rarely occurs in pure form and is often mixed with zinc blende, galena (lead) and copper pyrites. It is primarily used for making ornaments although some silver is used in the manufacturing of chemicals, electroplating, photography and for colouring glass etc. Chief producers are Mexico, Peru, Australia, China and Poland.

Platinum is a rare metal and is more costly than even gold. It is chiey used in electrical and chemical industry with jewellery industry and medicine being minor users. Canada, South Africa and the U.S.A. are the chief producers.

Diamonds are non-metallic precious stones. It is the hardest substance and is used for ornaments and in some industries. South Africa, Republic of Congo and Australia are the chief producers.

It is the most useful ferro-alloy and is used for making high quality alloy steel. South Africa, Kazakhistan, Turkey, India, Zimbabwe and Finland are the main producers.

Magnesite is one of the important ore minerals of magnesium. It is a refractory mineral which is used in refractories. Two main varieties of this mineral are (a) crystalline or spathic and (b) amorphous (cryptocrystalline). Australia, China, U.S.A. are the chief producers.

Kyanite is a member of alluminium-silicate group of minerals and is derived from argillaceous (coarse-grained) sedimentary rocks, Switzerland, Italy, Russia and U.S.A. are the main producing countries.

Sillimanite is a silicate of aluminimum which is mainly produced by France, Madgascar, U.S.A. and Sri Lanka.

Graphite is known as black lead or plumbage and occurs in metamorphic rocks. Sri Lanka, Madagascar, North Korea and U.S.A. are the main producing countries.

Gypsum is a hydrated calcium which is found in the sedimentary rocks. U.S.A., Canada, France, Italy and Britain are the chief producers.

Kaolin is also known as China clay. It is formed by alteration of granite by metamorphism and is mainly found in the U.S.A.

Salt (Rock Salt) Halite or sodium chloride is the common salt and obtained from rocks. U.S.A., China, Russia and Germany are the main producers. Salt range of Pakistan also yields some salt.

Energy gives motion to our industrial machines and vehicles. It is the primary input in the production of goods and services. The wheels of progress move with the flow of energy. Coal, petroleum, natural gas and electricity are the main sources of conventional energy while solar, wind, tidal, geothermal energy and biogas etc are non-conventional energy.