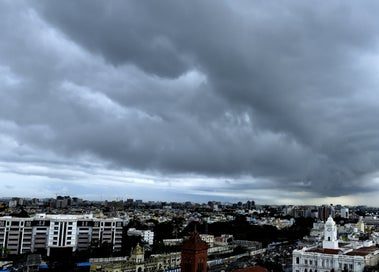 Cloud is a mass of minute droplets of water or tiny crystals of ice formed by the condensation of the water vapour in free air at considerable elevations. Clouds are caused mainly by the adiabatic cooling of air below its dew point.

Clouds are classified on the basis of (a) their appearance, i.e., the general shape, structure and vertical extent, and (b) their height or altitude.

On the basis of the appearance; the following cloud types may be identified:

Cirrus clouds are high, white and thin. They are composed of ice crystals. They form delicate patches and give a brous and feathery appearance.

These clouds have at base and appear like rising domes. They have cauliwer-like structure.

Stratus clouds are in the form of sheets of layers which cover much or whole of the sky. There are three main groups of clouds according to the average height of their bases. These are: High clouds (6-12 km); Medium clouds (2-6 km); and Low clouds (ground level to 2 km). Alto and Nimbo are the other two prexes which refer to middle level clouds and low clouds of considerable thickness with dark-grey appearance respectively.

In all there are ten types of clouds which are grouped here under three main categories arranged according to their height.

Condensation of water vapour in the air in the form of water droplets and ice and their falling on the ground is called precipitation. This may take place in liquid or solid form of water. Precipitation is of the following four types:

When condensation takes place at a temperature below freezing point, then the water vapour in the air is directly turned into solid state without passing through the liquid state. In the beginning, the condensed particles are in the form of minute particles of ice but these coalesce into one another and form bigger particles. The bigger particles fall on the earth in the form of snow akes.

Sleet is frozen raindrops and re-frozen melted snow water. It may be a mixture of snow and rain or merely partially melted snow. When a layer of air with temperature above freezing point overlies a sub-freezing layer near the ground, precipitation takes place in the form of sleet. The raindrops which leave the warmer air encounter the colder air below. As a result, they solidify and reach the ground as small pellets of ice not bigger than the raindrops from which they are formed.

When the humid air rises up, it cools and condensation of water vapour takes place. The water vapour is deposited on hydroscopic particles and turned into water particles. These are known as cloud particles. The cloud particles at in the air and clouds are formed. If these particles come close to one another, they may coalesce into bigger particles. When their size becomes so large that their weight is more than the upthrust of air, the particles will fall down in the form of rain. Obviously, following are two conditions for the occurrence of rainfall:

It is a well known fact that when a mass of moist air ascends to high altitudes it cools down to lower temperature. In doing so it attains dew point which leads to condensation and precipitation. Thus, the cooling of air occurs mainly when it rises. There are three important ways in which a mass of air can be forced to rise and each of these ways produces its own characteristic precipitation or rainfall. Consequently following three types of rainfall are generally recognised.

Excessive heating of the earth’s surface in tropical region results in the vertical air currents. These currents lift the warm moist air to higher strata of atmosphere. When the temperature of such a humid air starts falling below dew point continuously, clouds are formed. These clouds cause heavy rainfall which is called convectional rainfall. After causing heavy rainfall, the air of the higher strata of the atmosphere descends and replaces the rising warm air. This completes the air cycle and creates suitable conditions for convectional rainfall for the next day.