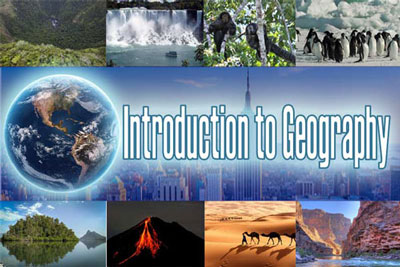 The term Geography has been derived from two Greek words viz. ‘Geo’ meaning ‘the earth’ and ‘graphos’ meaning ‘to write or describe’. us, the literal meaning of Geography is “to write about the earth including all that appears upon it.” In simple words geography is the description of variations in relief, climate, drainage, vegetation soil etc. in different parts of the world.

Eratosthenes (276– 194 B.C.) was the first scholar to coin the word ‘Geography’ in 234 B.C. to describe the earth. He was a Greek geographer who lived in Alexandria (Egypt). The mother earth has always been seen as the abode of human beings. us scholars like L.D. Slamp defined geography as “the description of the earth as the abode of human beings”. Since the main aim of geography is to describe the physical and cultural variations that occur on different parts of the earth, it is primarily concerned with the study of areal differentiation. Thus according to Richard Harsthorne, “Geography is concerned with the description and explanation of areal differentiation of the earth’s surface.” Areal differentiation or variations in the phenomen on over the earth’s surface is not the only concern of geography; rather it goes further to study the associations with the other factors which cause these variations.

For example, there are regional variations in the cropping pattern which are associated with variations in soils, climate, demand in the market, capacity of the farmers to invest and technological inputs available to the farmers.
In order to understand various aspects of geography we make use of globe which is the true representative of the earth. However, it is not convenient to use globe for all intents and purposes and instead we make use of maps. Here comes the important role played by Cartography. Modern scientific techniques such as Geographic Information System (GIS), Global Positioning System (GPS) and Computer Cartography are making a significant contribution in this direction.

Geography as an Integrating Discipline

Geography adopts a holistic approach in its study and recognises the interdependencies that exist in the world. Being an integrating discipline, geography is linked with several natural, social and biological sciences. ese scien ces are closely related to geography because there are spatial changes in their elements. Geography is a subject which is capable of making us understand the reality in totality in its spatial perspective. us geography takes note of spatial variations in the phenomena and also integrates them holistically. Obviously a geographer is supposed to have the basic knowledge of all the related fields so that he is able to integrate them. The integration of the related fields is necessary to have a proper understanding of geography.

Following are the main sciences closely related to geography: