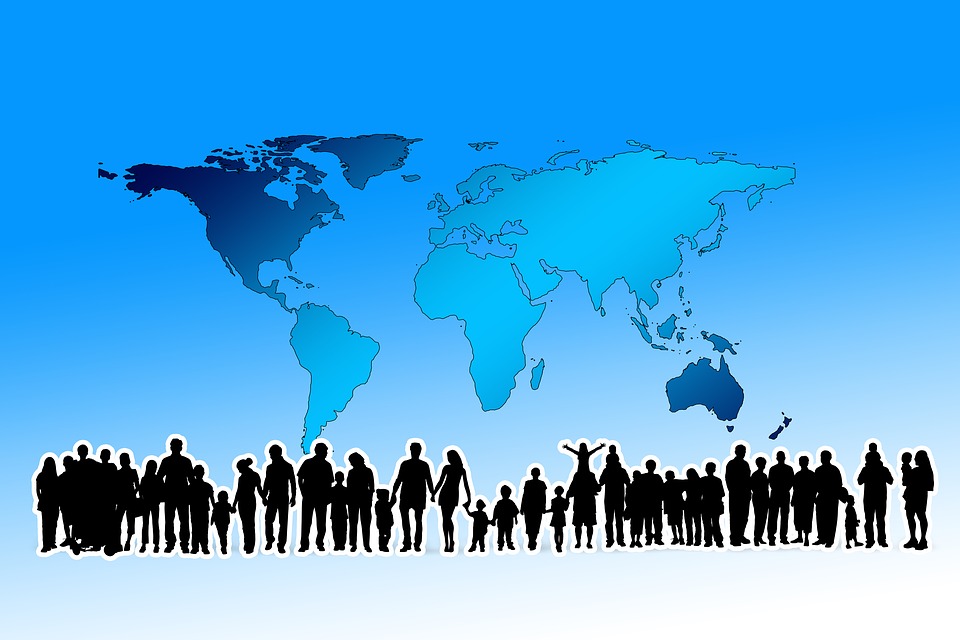 This is the change of population expressed in percentage.

This is the population increase by difference between births and deaths in a particular region between two points of time. Natural Growth = Births – Deaths

This is Births – Deaths + In Migration – Out Migration.

This happens when the birth rate is more than the death rate between two points of time or when people from other regions migrate permanently to a region.

If the population decreases between two points of time it is known as negative growth of population. It occurs when the birth rate falls below the death rate or people migrate to other countries.

Social geography is that branch of geography which deals with social theory in general and sociology in particular. It is concerned with population, ethnicity, religion, sex ratio, literacy etc. Economic geography is basically concerned with the economic activities of man, Hunting, gathering, agriculture, mining, manufacturing, transport, trade etc are the main economic activities of man.

Population growth is the change in the number of inhabitants of a territory during a specific period of time. If the population of a given area increases in a specific period of time, it is called positive change. If, on the other hand, it decreases, the area is said to have negative change. At present, in most parts of the world, especially the developing countries of the world, the population

The world population has been growing at varying rates ever since first man appeared on the surface of the earth. In early stages of human civilization, man was mainly engaged in hunting, gathering, fishing, farming, lumbering, her ding etc. He used simple tools and moved from place to place. Consequently, the population grew at a very slow rate and is termed almost stable when compared to the present rate of growth. Even after agricultural revolution about 8,000 to 12,000 years ago, the size of human population was small. This can be ascertained from the fact that the world population in the st century AD was only 250 millions.

Expansion in international trade in sixteenth and seventeenth centuries set the stage for rapid population growth. e world population at the dawn of Industrial Revolution i.e. around 1750 was about 0.7 billions. It however, exploded in the eighteenth century after the Industrial Revolution. A series of dramatic technological changes rapidly expanded the resource base and provided a foundation for accelerated population growth that continued for more than two centuries.

Development of steam engine provided energy to industries and transportation. Mechanisation brought about improvements in agricultural and industrial lds. Scientific and technological advancements improved the quality of life.

Improvement in medical facilities and sanitation improved health conditions. Inoculation against epidemics and other communicable diseases, suppression or elimination of many disease vectors and improvement in sanitation contributed to the rapid decline in the death rates, in virtually all parts of the world. s brought about a dramatic increase in the growth of population all over the world. There has been no looking back since then.

At the beginning of the Industrial Revolution, the world population was growing at the rate of about 0.12 per cent per annum. There after the population grew at an accelerated rate which rose to 1.0 per cent in 1930 and 2.1 per cent in 1960s. The fast growth rate of population was a cause of concern for the world. Many developed countries were quick to respond. The developing countries are gradually trying to check this rapid growth. During past four decades efforts to bring down population growth rate have borne fruit. Consequently, the growth rate has slowly declined and the current growth rate is 1.4 per cent.

Although no authentic information is available about the number and growth of population for early stages of human history, yet a rough estimate of world population is reproduced in the following table.

Doubling time is the time taken to double the world population. It is a very effective method of comparing population growth

Number of Years for World Population to increase by one billion

with respect to time. Time taken to double the world population is reducing which indicates that the world population is increasing at an accelerated rate. Till 1950, the growth rates were higher in developed countries of North America, Europe and also in Japan in Asia and were lower in the developing countries of Asia, Africa and Latin America. However, between 1960 and 1970, the growth rates rose to 2.2 per cent in the developing countries and declined 1.1 per cent in the developed countries.