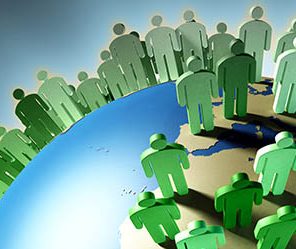 This region includes China, India, Bangladesh, Japan, Korea, Java island of Indonesia and Singapore. Fertile soil, sufficient rainfall and intensive rice cultivation are bases of high density of population in these areas. us, high density is based on agriculture and at places it ranges from 400 to 800 persons per sq. km and even more. Some of the countries such as Japan, India and China have witnessed large scale industrialisation and urbanisation which have further added to population density. Highest density is recorded in Singapore where nearly five thousands persons live per sq. km. Normally speaking, population density follows the intensity of rainfall.

A major part of population in Europe is based on mining, industries, trade and commerce and lives in urban areas. Themain area of high population density extends from English Channel in the west to Dnieper river in the east. This is known as population axis of Europe. This is also the main industrial belt of Europe e main countries included in this belt are Netherlands, Belgium, Germany, North France, Czech Republic, Slovakia, Poland, Ukraine, and Moscow region of Russia. The river valleys and coastal plains of Spain, Portugal, South France and Italy also have high density of population.

In most of the advanced countries, the major concentration of population is in a few urban areas. Industrialisation and modern technologies have modified settlement and density patterns over the past two centuries. Nearly three-quarters of the population in the developed countries now live in urban environments, with many more living in and around major metropolitan areas. Northern and Western Europe are among the most urbanized regions with more than 80 percent of their population living in urban areas. In North America about 70 percent people are city dwellers. City states such as Hong Kong and Singapore, which have virtually no rural or agricultural hinterlands, have practically all urban population.

While industrialisation and commercialisation processes caused a population shift from rural to urban areas, technologies created artificial environments in many modern cities. Rising from the deserts of southern California and Arizona, Los Angeles, San Diego, Phoenix and Tucson are sprawling, rapidly growing metropolitan areas that are sustained only by importing water via complex systems of canals and aqua products.

Areas having a population density of 1 to 2 persons per square kilometre are known as areas of low density. Such areas cover about 95 crore sq. km which is about three-fourth of the total surface area of the earth.

Areas of low density of population include the following regions:

These are polar regions which include northern part of Canada, Greenland, northern part of Siberia and the vast Antarctic Continent surrounding the south pole. Low temperature limits the growing season to a very short duration and most of the areas remain ice covered for most of the year. Therefore, these areas support low density of population. Antarctic continent is totally uninhabited.

These include dry areas of Central Asia. They are located in rain shadow zone away from sea and receive very little rainfall. Gobi desert is one of such area.

Amazon basin of South America and Zaire basin of Africa are the main areas of equatorial region. These areas experience both high heat and high humidity which is harmful to human health. Diseases like malaria, jaundice, dysentery etc. are very common. This also leads to very dense growth of forests which leaves very little scope for human settlements.

Some of the areas of medium density are described below:

United States of America and Australia

The central and western parts of these countries have medium density of population.