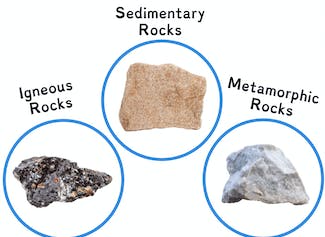 A rock is an aggregate of one or more minerals. According to petrologists (scientists who study rocks), “Rocks may simply be defined as all those materials which form the crust of the earth, whether hard like granite or soft like clay, gravel or sandstone.”

Following three types of rocks are generally recognised on the basis of their formation:

The hot liquid lava may get solidfied by cooling either at the surface of the earth or below in the cracks. Accordingly two types of igneous rocks are generally recognised.

The word ‘plutonic’ has been derived from a Greek word ‘Pluto’ which means the ‘god of the underworld’. Obviously, these rocks have been formed by solidification of magma at great depths below the surface. The rate of cooling is much slower and the size of crystal is very large. A highly coarse-grained granite is a typical example of plutonic rock. e granite of various colours grey, red, pink or white is found in the Deccan Plateau in South India, Chhattisgarh, Chota nagpur in Jharkhand, Rajasthan and in parts of the Himalaya. It is used largely as a building stone and many ancient monuments like temples, forts, etc. are made of granite rocks.

Often, magma coming up from below does not reach the surface and gets solidified in cracks and joints forming hypabyssal rocks. e magma which forms hypabyssal rocks cools down quicker than that forming plutonic rocks and the crystals are of comparatively smaller size. Dolesite and Pegmatite are the chief examples of hypabyssal rocks. Igneous rocks can be classified on the basis of their chemical composition also. Those with a high proportion of silicon are said to be acid and others with a high proportion of basic oxides are denser and darker in appearance are known as basic rocks.

Two outstanding examples of sedimentary rocks are those of sandstone and chalk. Sandstone is made from grains of sand which is consolidated, cemented and compacted into a rock. Chalk is made up of millions of living calcium carbonate (lime) skeletons of microorganisms. The lime shells of such organisms are cemented into chalk and limestone of organic origin.

The sediment is deposited layer after layer. As new layers are deposited, the underlying old layers experience progressively deeper burial. Under increasing pressure imposed by the overlying load, water is excluded from the sediment. They become denser and strongly coherent.

Sedimentary rocks are classified in a variety of ways. Clastic rocks consist of particles removed individually from the parent rock. Non-clastic rocks are made up of sediments of two basic types viz. as chemical precipitates and is organically derived sediments. Sedimentary rocks may also be classified into organic and inorganic rocks. Organic rocks may be calcareous containing calcium (chalk, talc, dolomite etc) and Carbonaceous, containing carbon (coal). Inorganic sedimentary rocks are formed due to weathering, erosion and deposition of old rocks. They are basically of two t ypes viz. arenaccous, containing sand (sand stone) and argillaceous containing clay.

The word metamorphic has been derived from two Greek words ‘Meta’ which means ‘change’ and ‘Morphic’ meaning ‘form’. Thus, metamorphic rocks are formed when the original character of the igneous and sedimentary rocks–their colour, hardness, texture, and mineral composition is partly or wholly changed. These changes take place under favourable conditions of heat and pressure.

Different types of metamorphism have been observed depending the agency that brings about metamorphism and on the zone of influence where it is caused.

Metamorphism on the basis of Agency

This type of metamorphism is caused by dynamic and thermal agencies.

This type of metamorphism is caused by pressure. As a result of pressure, granite is converted into gneiss; clay and shale are transformed into schist at great depths of the earth’s crust. Both these rocks are commonly found over large parts of South India and in some parts of Assam, West Bengal, Jharkhand, Odissa, Madhya Pradesh, Chhattisgarh and Rajasthan. They are also found in the Himalayas. Gneiss is largely used as a building stone and statues in the regions of its occurrence.

The change which takes place under the influence of high temperature prevailing within the earth’s crust is known as the process of thermal or contact metamorphism. As a result of this type of metamorphism, sandstone changes into quartzite; clay and shale are transformed into slate. Slate further changes into phyllite at temperature varying from 150° to 200°C. The coal turns into anthracite and graphite with over 90% carbon. Limestone is converted to marble.

Metamorphism on the basis of Zone of Inuence

On this basis the metamorphism is of two types:

When the forces of heat by intrusion or deep burial and earth movements act together over large areas, the widespread change of rocks is the result of regional metamorphism e quartzite rock is one of the most resistant to weathering, forming mountains and ridges. It is used in glass-making.

This is just like thermal metamorphism. In areas of mountain-building or of vulcanism, molten matter may be injected into the existing rocks even close to the surface. Such a contact with heat over a limited area of about 2 km. from the intrusion brings about a change in rocks under temperatures ranging from 50° C to 800° C. Some such reason is responsible for the peak of Mount Everest consisting of metamorphosed limestone. Many examples of contact metamorphism are found in South India. Some important examples of metamorphic rocks are listed below.