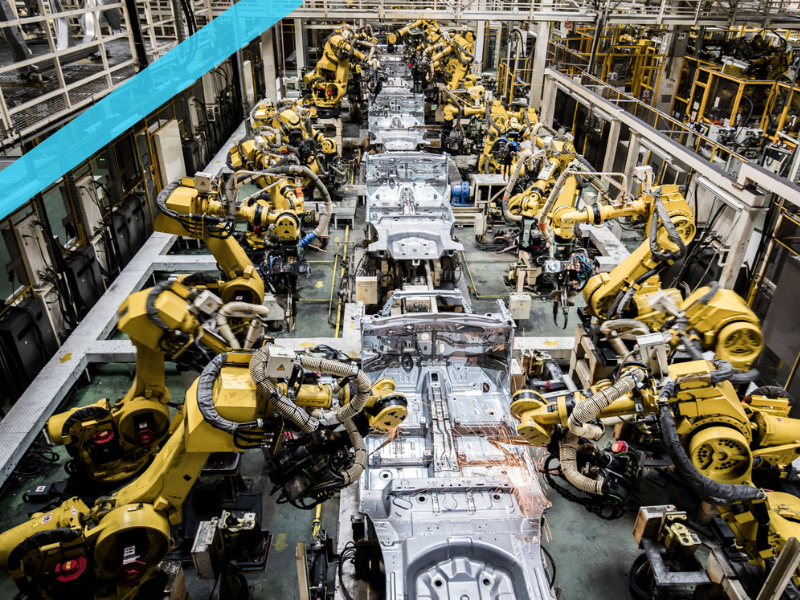 A brief description of some of the important engineering industries is given as under: Machine Tools are mainly produced in the U.S.A., Russia, Germany, Switzerland, Japan and India.

Automobiles industry developed in Europe at the end of the 19th century. At present it consists of large number of vehicles such as cars, trucks, buses, three wheelers and two wheelers. It depends upon the availability of steel, rubber, plastic and a large number of components which lead to creation of a large number of ancillary industries. e U.S.A., Japan, Germany, France and Italy are the major producers.

Aircras industry is a hightech industry and is conned to technically advanced countries only. Also it requires huge capital investment which only a few rich countries can afford. U.S.A., U.K., France, Russia and Canada are the chief producers.

Ship Building Industry is also capital and technology intensive and is conned to the U.S.A., Sweden and Japan. South Korea, Singapore and Greece are fast emerging as important producers. Many major ports of Europe are also great manufacturers of ships.

Electronics Industry is mainly concerned with electronic equipments such as computers and other equipments of everyday use. It provides maximum employment in proportion to capital investment. It is entirely based on technological development and is not affected by the availability of raw materials. U.S.A., Japan, China and some European countries are some of the leading countries in this industry. In the recent times, some of the south-east Asian countries like South Korea and Indonesia have emerged as important producers.

It is the key industry as a large number of industries depend on this industry for the basic raw materials. It has a large number of products and is widely diverse and complex industry. Chemical industry has the following six branches. Heavy chemicals like sulphuric acid, soda ash, caustic soda, chlorine, nitric acid, hydrochloric acid etc. Electro-chemicals such as fertilizers, nitrate, ammonia, carbides, wood pulp etc. Petrochemicals includes plastics, man made breeds, fertilizers, synthetic rubber, explosives etc.

Some of the important chemical industries are briely described as under:

Heavy chemical or basic chemicals are produced on a large scale and are used as raw materials in other industries. Sulphuric acid is the most widely used product in the chemical industries and is known as the ‘chemical barometer’ because a large number of industries such as fertilizers, petroleum refineries, steel plants, by products of coal, ore reg, rayon and synthetic yarns, paper, paints and dyes, glass, tanning, drugs etc. use it as a raw material. About 25% of the total production of sulphuric acid is used by fertilizer industries, 20% by oil refining and chemical products and the remaining 55% by other industries. China, the U.S.A., Japan, Russia, India, Brazil, Canada, Spain, Finland, France etc. are the main producers. Nitric Acid is produced from nitrogen present in the atmosphere and is used in fertilizers, paints, drugs and explosives. U.S.A., Poland, Finland, Germany, Belgium, Canada, China etc. are the chief producers. Soda Ash is the cheapest and most widely used chemical, mainly in paper, soap, glass and oil refining industries.

The U.S.A. and China together produce about three fifths of the world’s output. Caustic Soda is used in manufacturing soap, glass, paper, textiles and oil reg. e U.S.A. is the leading producer accounting for about 30% of the world’s production. China, and Japan are the other major producers.

Fertilizer industry provides the basic input for improving soil fertility and for increasing the agricultural production. It relies chiefly upon three important raw materials–phosphate, potash and nitrate. It also depends upon nitrogen obtained from the air. Accordingly there are three types of chemical fertilizers viz. i) nitrogenous fertilizers (urea, ammonium sulphate, nitro-limestone), ii) phosphatic fertilizers (in the form of super phosphate like nitro-phosphate and ammonium phosphate) and iii) potassium fertilizers (in the form of potassium). China, the U.S.A., and India are the leading producers of nitrogenous fertilizers. The U.S.A., China, India, Russia, Australia, Brazil etc. are the major phosphatic fertilizer producers. Nearly 75% of the potassic fertilizer comes from Canada, Germany, Belarus, U.S.A. and Russia.

Various products of glass industry are used in the present day daily life and thus it is one of the major industries in the world. Its raw materials like sand, soda ash, lime, salts etc. are very cheap and account for only 10-15% of the total cost of production. Therefore, it is not much affected by raw materials, rather, it is inuenced by availability of market and fuel because its raw materials are heated at very high temperature varying from 1400° c to 1600° c. e U.S.A. leads the world in the manufacturing of glassware. Germany, U.K., Belguim, France, Russia, India and Japan are the other leading producers.

Paper is “the backbone of modern civilization”, as it is essential for education. It is a forest based industry as most of the pulp and paper is made from so wood of the coniferous forests found mainly in northern parts of Canada and Eurasia. e other raw materials used are esparto grass, sebai grass, bhabar grass, bamboo, cotton lint, cotton waste, waste paper and rags etc. Sowood is used for coaster paper like newsprint while other raw materials give better quality paper. Apart from these raw materials, this industry also depends upon the availability of abundant pure water, cheap power, chemicals like caustic soda, soda ash, chlorine, china clay etc., cheap and skilled labour and a ready market.

There are two methods of converting wood into pulp: (i) mechanised and ii) chemical. All the newsprint and other cheap grades of paper are made from mechanical pulp while better quality of paper is manufactured by chemical method. Canada, the U.S.A., Sweden, Finland and Russia are the leading producers of mechanically made pulp and the U.S.A., Canada, Sweden, Finland, Japan, Russia are the major producers of both mechanically and chemically produced pulp.

Cement is a very important ingredient in the development of the present day civilization. Limestone is the basic raw material. Over 100 countries are producing cement. China, India, the U.S.A., Russia and Brazil are the chief producers.

This industry is concerned with legal production, distribution and consumption of medicines for curing diseases and for maintaining good health. Although drugs and medicines are produced in almost all the countries of the world, yet the major producers are the U.S.A., Switzerland, Germany, Italy, U.K., Belguim and the Netherlands. Indian drugs and pharmaceuticals industry is progressing at a fast rate.

Therefore, the sugar mills are located in the sugarcane growing areas only.

Producers: Since sugarcane is a tropical crop and sugar beet is a temperate crop, the producing countries of both type of sugar differ widely from each other.