Structure of the Atmosphere 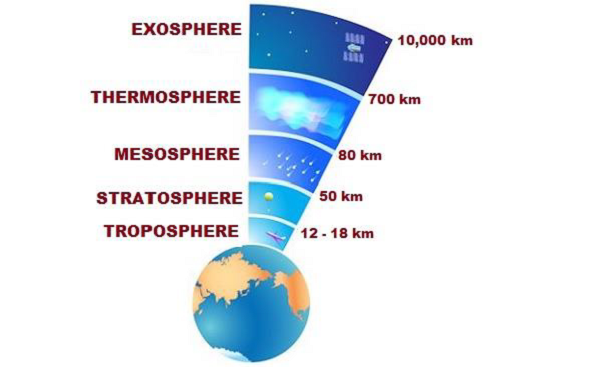 The atmosphere consists of almost concentric layers of air from bottom to its highest limit. These layers differ from one another with respect to density and temperature. On the basis of the chemical composition, the atmosphere is divided into broad layers:

The homopsphere extends upto the height of 90 km. It is characterised by uniformity in chemical composition. It consists of three thermal layers–troposhere, stratosphere and mesosphere. Each sub-layer is separated from the adjoining layer by shallow transitional zone identifid by terms ending with “pause”.

This is the lower most layer of the atmosphere. Its average height is 16 km although it is only 10 km at the poles and extends up to 18 km at the equator. Thickness of the troposphere is the greatest at equator due to upward transportation of heat by strong conventional currents. The height of troposphere at a given latitude is greater in summer than in winter. Temperature decreases with height in this layer, roughly at the rate of 1°C for 165 metres (or 0.65°C per 100 metres) of ascent. This is known as normal lapse rate. This is the most important layer for man.

This layer contains dust particles and over 90% of the earth’s water vapour. All vital atmospheric processes leading to various climatic and weather conditions take place in this layer.

The upper limit of troposphere separating it from stratosphere is called tropopause. This is a very unstable and thin layer of 1.5 km thickness only. Temperature stops falling and convection currents cease to function at this height. The air temperature at the tropopause is about – 80°C over the equator and about –45°C over the poles. It is apparently a paradox that the lowest temperature in the atmosphere is vertically overhead the equator rather than over the poles. This is due to the fact that troposphere extends upto a height of 18 km at the equator whereas it is only 10 km at the poles.

It extends upto a height of 50 km. It is thicker at the poles than at the equator. The temperature remains almost const ant in its lower portion upto a height of 20 km. Consequently, it is known as stratosphere. Afterwards it gradually increases upto a height of 50 km due to the presence of ozone gas which absorbs sun’s ultra-violet rays. The temperature rises to about 0°C at the upper limit of stratosphere i.e. at the level of stratopause. There are practically no clouds, convection currents, thundering and lightening, water vapours, dust particles, etc. in this layer. Whatever clouds are there, they are very rare and occur only in restricted areas over the Antarctica in winter. These clouds are called “mother of pearls” or nacreous due to their colouring.

The lower portion of the stratosphere having maximum concentration of ozone is called ozonosphere. It is coned to a height varying from 15 km. to 35 km. although its upper limit extends to 55 km. above sea level. Ozone is a special type of gas with three atom isotope of oxygen or merely triatomic form of oxygen. It lters ultraviolet radiations from the sun and saves us from their ill-effects. It also saves mankind from the meteorites falling on the earth as it burns them as they enter into the ozone layer.

Depletion of ozone layer is caused by chemical pollutants discharged by industries or produced through other chemical reactions. The major cause of ozone layer depletion is the increasing use of chlorouor ocarbons (CFCs). These substances are inert, inexpensive, stable, non-inammable, non-toxic, easy to store and produce. CFCs are used in refrigerators, air conditioning systems, spray cans, insulation materials, plastic packaging, and as cleaning fluids. The use of these machines and materials results in the release of CFC gas into the air, where it lingers for 60 to 400 years. When CFCs reach ozone layer, the UV rays break apart the CFC and release chlorine atom. The chlorine atom reacts with ozone and converts it into simple oxygen which is unable to absorb UV rays. A single atom of chlorine can destroy 1,00,000 molecules of ozone. It is feared that if CFCs are allowed to be emitted as freely as they were in 1980s the ozone layer will be reduced by about three per cent in the coming 70 years. If emissions of CFCs double the current rate about 12 per cent of ozone layer could disappear.

Space probes are also said to be responsible for the depletion of ozone layer. It is estimated that every time a rocket is ed into space 70 to 150 tonnes of chlorine is injected into the atmosphere. By 1990, 1500 rockets were sent into the space and the number is increasing at a very fast rate.

The third cause of ozone layer depletion is supposed to be due to oxides of nitrogen, especially nitric oxide, released from supersonic aircraautomobile exhausts, use of nitrates as fertilizers in agriculture etc. Any increase in quantity of these substances results in ozone layer depletion. The uppermost limit of stratosphere is called stratopause. It contains maximum ozone gas.

Scientists studying the atmosphere from Antarctica first suspected in 1970s that ozone layer was thinning. This was conmed in 1985. In 1986, the US agencies, viz. National Aeronautics and Space Administration (NASA), National Oceanic and Atmospheric Administration (NOAA) and Federal Aviation Administration (FAA) started reporting on ground and satellite based data about ozone depletion in stratosphere. A multinational expedition found that there was 50 to 100 per cent depletion of ozone in certain parts over the Antarctic Continent during the period between August 1987 and October 1987. Part of the ozone layer with little or no ozone is known as ozone hole.

Ozone hole as large as the size of the USA or the entire continent of Europe was detected by the British scientists in 1987. At present ozone hole is bigger than the whole continent of Antarctica (Figure. 3.2). The more alarming thing is that the hole is increasing as the time passes. Countries like New Zealand, Australia, South Africa, Argentina, Chile etc. which are in close proximity to the Antarctic continent and are encompassed by the ozone over Antarctica are at much greater risk than the rest of the world.

It lies above the stratosphere and extends from 50 to 90 km. Temperature decreases with height in this layer and falls down to 110°C at the height of 80 at 90 km. Mesosphere displays high wispy clouds in high latitudes during summer due to rected sunlight from meteriolic dust particles. The upper limit of mesosphere is known as mesopause.

Heterosphere extends above the homosphere i.e. above the level of mesosphere. It has heterogenous chemical composition with layer structure of nitrogen, oxygen, helium and hydrogen. It is also a layer of thermosphere which continues to the edge of space about 60,000 km above the earth’s surface.

It extends from 100 km to 400 km and lies above mesosphere. It contains electrically charged particles which are known as ions. Hence, this layer is called ionosphere. The maximum concentration of ionised particles occurs at 250 km. Temperature again starts increasing with height because of radiation from the sun. Radio waves transmitted from the earth are reflected back to the earth by this layer. Thus ionosphere is helpful in radio transmission over the surface of the earth. The Aurora Borealis (North light in the northern hemisphere) and Aurora Australis (South light in the southern hemisphere) are produced by penetration of ionizing particles through the atmosphere from 80 km to 300 km.

Koeppe has divided ionosphere into D, E, F and G layers. D layer rects the signals of low frequency radio waves but absorbs the signals of medium and high frequency waves. E. Layer was discovered by Kennedy of the U.S.A. and Heaviside of England and is also known as Kennedy-Heaviside layer. Its boundaries are better dened and it extends from 90 km. to 160 is layer is important because it reects mediu m and high frequency radio waves back to earth. F-layer consists of two different layers called F 1 and F2 layers. ese two layers were discovered by Appleton as a result of which these layers are also known as Appleton Layers. These layers rect medium and high frequency radio waves back to the earth and are useful for long distance radio transmission. G-layer lying above 480 km. probably persists day and night but is hardly detectable.

Layer extending above thermosphere is known as exosphere whose base is between 500 km. and 750 km altitude. Very little is known about this layer. This layer is extremely rared and gradually merges with the outer space. It has no deed border as the altitude rises; it thins out until there are no air molecules left.