Landforms Made By Sea Waves 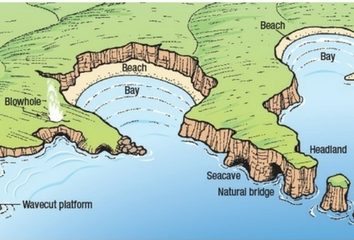 Sea waves are active on the coast and landforms made by sea waves are known as coastal landforms. A large number of features are made by the erosional and depositional work of sea waves.

Sea cliff is an important feature created by the erosional work of sea waves. It is a scarp face of the coast facing the sea. In the beginning, the sea waves cut a groove in the rock at sea level which is known as a notch. This notch keeps on widening with the passage of time. It thus undermines the overhanging rock until it falls into sea and forms a cli. As the cliff retreates further by the erosional work of the waves, a wave cut platform is produced. This is also known as Terrace.

Sea waves can erode so rocks faster than the hard rocks. At several places rocks are traversed by joints, faults or bands of weak rocks. Sea waves easily erode these weak points leading to the formation of sea caves. A marine arch or a natural bridge is formed when the sea waves working from opposite direction are able to cut through the caves. When the roof of a marine arch collapses, a portion of the arch keeps standing in the sea like a pillar. This is known as stack. If a hole is developed in the roof of a sea cave, it is known as blow hole or spouting horn. When the sea water enters the sea caves, the air of the cave is pressed up by sea water and the air passes through the hole with a noise. Spouting horn is the name given because of the voice the blow holes make. Sea beaches, sand dunes, spits, bars, lagoons etc are some of the important feature made by the depositional work of sea waves.

A beach is formed due to the deposition of sand, gravel and pebbles on the shore between low-tide level and the coastline. A beach grows in size when waves are less active but it may be completely destroyed by strong waves in a storm. Most of the beaches are made up of sand sized materials. Beaches called shingle beaches contain excessively small pebbles and even cobbles. Just behind the beach, the sands lifted and winnowed from over the beach surfaces will be deposited and sand dunes.

Spit is a ridge or embankment of sediments deposited by the waves and attached to the land at one end and projecting in the open sea at the other. It is formed when the waves deposit the rock-waste tangentially to the headland.

A bar is a sort of embankment of sand and gravel built by the depositional work of sea waves. It normally extends between two adjoining headlines of hard rocks or it runs roughly parallel to the shoreline. A bar formed in the offshore zone lying approximately parallel to the coast is called off-shore bar. An offshore bar which is exposed due to further addition of sand is known as barrier bar. When bars further extend, the sea water is partially enclosed between the coast and the bar which is known as a lagoon lake or haff. A lagoon generally maintains connection with the open sea through a narrow gap between the bar and the headlands. The Chilka and the Pulicat lakes along the East Coast and Vembanad on the Kerala Coast in the west are examples of lagoons in India.