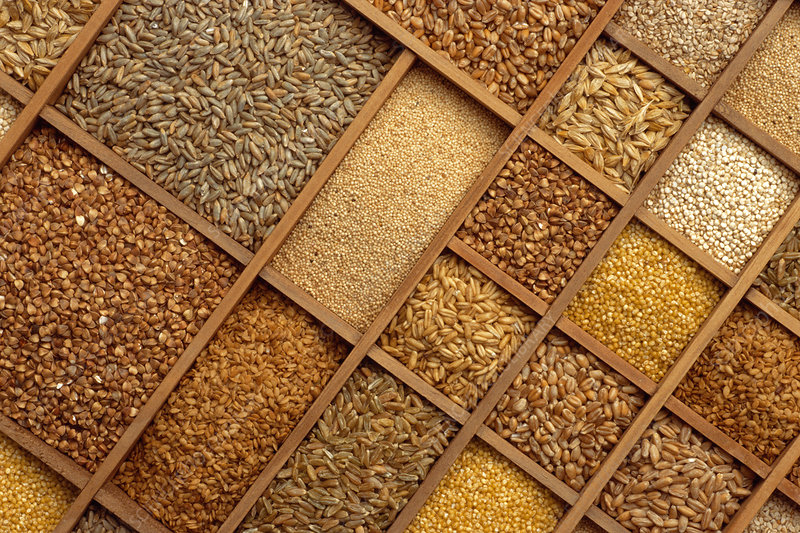 It is staple food of large population living in monsoon Asia, tropical and subtropical lands. Conditions of Growth:  Average temperature between 20°and 27° C ; at least 15.5° C to germinate and over 21° C to grow and 28° C at the time of ripening.

Rice is a labour intensive crop because much machinery is not used in its cultivation.

Next to rice, wheat is the second most important food crop of the world. It is a temperate crop and is largely grown in winter. About 80 per cent of the world’s wheat is winter wheat. Spring wheat is grown in higher latitudes where winters are too cold for wheat. The ideal temperature for wheat is 15° C to 20° C and it requires about 75 cm annual rainfall. Highest rainfall is 100 cm and isohyet of 100 cm demarcates the maximum limit for wheat producing areas.

Wheat can be grown on a variety of soils but well drained fertile, friable loams and clay loams are more suited to its cultivation. Some of the best soils are in the “Black Earth” region of Ukraine, the dark brown prairie soils of North America.

Rolling plains with gentle slopes provide ideal conditions because it facilitates the use of machinery. It is a highly mechanized crop and requires less labour as most of the work is done by machines.

It is the third most important food crop after rice and wheat and the most important coarse grain. It is known as corn in America and Europe. It is used as food stuff in poor countries and fodder for domestic animals in the mid-latitude countries. In N. America it is fed to meat animals for fattening them. It is due to this fact that it is said that “maize travels to market on hooves” Maize grows well in areas having 18°- 27° C temperature and 60-70 cm annual rainfall. It requires at least 140 frost free days during its growth.

Maize can be grown on a variety of soils but well-drained deep loamy soil is the best suited for this crop.

Barley ranks high in food value as it is rich in protein but most of it is used as fodder for domestic animals. Its conditions of growth are more or less similar to those of wheat but it can be grown in areas of lesser rainfall and poor soils.

Millets are species of small grains whereas sorghum are large grains. Jowar is called the Great Millet or Sorghum while bajra and ragi is small millets. In North China a giant millet known as Kaoliang is grown. Great Millet is called dusra or Guinea corn in Africa.

These crops are largely grown in the tropical lands having low rainfall varying from 40 to 60 cm per annum. Excessive moisture and prolonged drought are harmful. They thrive well in temperature ranging from 20° to 30° C. They can be grown in infertile soils but medium and deep black soils are most suited. Flat or gently sloping lands are ideal.

Oats comprise one of the hardest cereal which is usually grown in cool humid climate of the temperate zone between 40° and 55° N. latitudes. Russia, U.S.A., Canada, Australia, Germany, Ukraine, Romania, Finland etc. are the main producers.

Has very high gluten content and is mainly used as animal feed. Its conditions of growth are almost those of wheat but can be grown on poor soils also. Russia, Poland, Belarus, Germany, Ukraine, Uzbekistan, Kazakhstan and China are the chief producers.

Are rich in protein and being leguminous, they restore soil fertility to a great extent when grown in the system of rotation. Gram is the most important and is grown as a rabi crop which needs low to moderate rainfall and cool weather. Tur (also known as arhar) is a kharif crop grown in dry areas. Black gram, green gram and lentil are also important pulse crops. The first two are kharif crops while the third is rabi crop. These crops are grown mixed with other crops.