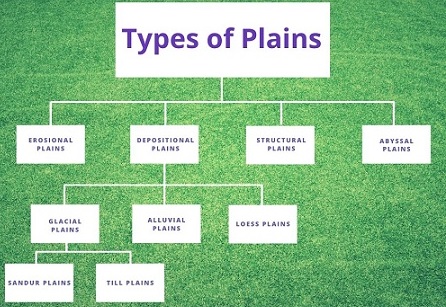 A relatively at and a low-lying land surface with least difference between its highest and lowest points is called plain. Depending on their formation plains can be divided into following three classes.

These are structurally depressed areas which make some of the most extensive lowlands. They are usually formed by horizontally bedded rocks which are relatively less disturbed by the crusted movements of the earth. Such plains include the great plains of Russian platform, the great plains of the U.S.A and the Central lowlands of Australia. Some of the coastal plains which are formed by the uplift of the continental shelf are also classed as structural plains. The coastal plain lying between the Appalachian Piedmont Plateau and the Atlantic coast of south-eastern United States is an example of uplifted coastal plains. The Malabar Coastal Plain of India is also the result of uplift of continental shelf.

The plains of North America and north-west Europe are driplains. Ladakh has a glacial plain to the east of Shyok river north of Chang Chenmo river. Lacusirine plains are formed due to deposition of sediment in the lakes. The valley of Kashmir, the Im phal basin in the Manipur hills are examples of this type. The fertile soil of these areas have made them areas of good agriculture and thick population within mountains. Loess plains are formed by the depositional work of wind. The loess plains are found along normal margins of west Rajasthan, Russian Turkistan and north-western China. The depositional work of sea waves results in the formation of coastal plains.