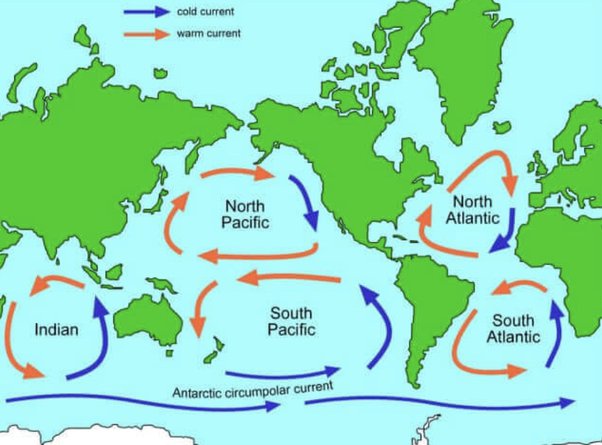 The winds blowing from the sub-tropical high pressure belts towards the sub-polar low pressure belts are called They are normally prevalent from 30° –40° to 60° –65° latitudes. Under the influence of Coriolis force, they blow from south-west to north-east in the northern hemisphere and north-west to south-east in the southern hemisphere. They are called westerlies because they blow from western side in both the hemispheres. Since they blow from lower latitude to higher latitudes, they cause considerable rainfall particularly on the western margins of the continents. ese winds are more consistent in direction and blow with stronger force in the southern hemisphere due to lesser obstruction of continents. The westerlies are best developed between 40° and 65° south latitudes. Here they are known as brave west winds. According to the sound created by westerlies, these latitudes are often called roaring forties, furious fifties and shrieking sixties. These are dreaded terms for navigators.

The winds blowing from the polar high pressure belts towards the sub-polar low pressure belts are known as polar winds. They were from NE to SW direction in the northern hemisphere and from SE to NW direction in the southern hemisphere under the influence of Coriolis force. They are very cold because they originate in the polar areas. They do not cause much rainfall because they blow from cold to warm areas. These winds give birth to cyclones when they come in contact with the westerlies. This brings about frequent change in the weather and heavy rainfall occurs.

Shifting of the Wind Belts

Wind belts described above keep on shifting north and south depending on the movement of the sun. On March 21 and September 23, the rays of the Sun fall vertically on the Equator. On these dates, the Equatorial Low-Pressure Belt of Calms lies between 5°N and 5°S, and the Sub-Tropical High Pressure Belts of Calms lie near 30°N and 30°S. But after March 21, the Sun moves northwards, and so the whole system of pressure belts also moves northwards with it. On June 21, when the Sun shines vertically over the Tropic of Cancer, all the pressure belts move about 5 –10° north of their original position. After June 21, the Sun moves southwards and shines vertically again over the Equator on September 23. On this date all the pressure belts come to their original position. After September 23, the Sun moves towards south of the Equator so much so that it shines vertically over the Tropic of Capricorn on December 22. On this date all the belts swing 5° –10° south of their original position.

This shifting of the world’s pressure belts also causes the shifting of the world’s wind system, because of which there have been certain important consequences regarding climate. e regions, lying between 30° N to 40° N and 30° S to 40°S come under the influence of the Trade Winds during the summer season. These prevailing trade winds are o-shore, and do not cause any rainfall in the Mediterranean lands (lying on the western margins of 30° to 40° latitudes). In winter, these areas come under the influence of the westerlies and receive rainfall in that season. The pressure belts also shift southwards. On March 21 and September 23, the sun’s rays are vertical on the equator and there is no shift in the pressure belts.

The winds, which change their direction periodically are known as periodic winds. Following are some important examples of periodic winds: