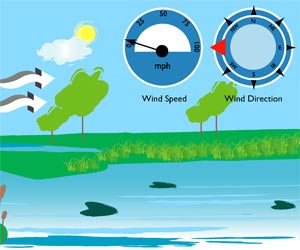 Wind direction and wind velocity are two main characteristics of winds. Wind direction is stated in terms of direction from which the wind is blowing and is measured with the help of an instrument called wind vane. Wind velocity is expressed by Beufort Scale. This scale was devised by Beufort in 1805, and it was modid in 1926. It is related to the descriptions of wind effects and estimated velocity at 10 metres above the ground.

When a cold air mass forces its way under a mass of warmer air and pushes the latter upward, the front will be called a cold front.

In each case precipitation is likely to occur, because warm air is rising over cold air. The duration and intensity of the precipitation along the two fronts are quite different. The cold front is steep and produces showery, and sometimes violent precipitation for a longer period of time. If the cold front moves faster than the warm front in such a trap, part or all the pocket of warm air may be lied from the surface, thus, producing an occluded front. After occlusion, the air masses lose earlier characters and from new fronts.