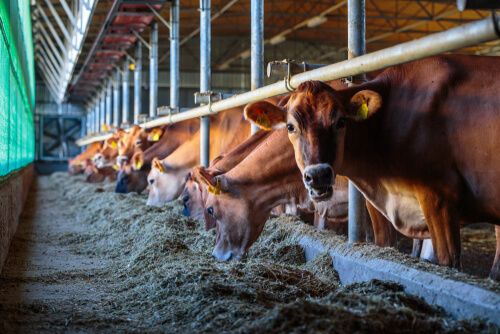 Livestock includes domestic animals such as cattle, buffaloes, sheep, goats, horses, ponies, donkeys, camels, pigs, etc. In 2012, India had 190.90 million cattle, 108.70 million buffaloes, 65.05 million sheep, 135.17 million goats, and 648.7 million poultry birds. Thus India far exceeds any other country of the world insofar as the number of animals is concerned. India boasts of about half of the buffaloes, one h of the cattle and one sixth of the total goat population of the world. But this quantitative supremacy in no way speaks of the quality of our animals. Our animals are of poor quality in terms of stamina for draught and milk yield.

States having considerable number of cattle in descending order are Madhya Pradesh, West Bengal, Uttar Pradesh, Maharashtra, Odisha, Rajasthan and Bihar. Although majority of Indian cattle are of poor quality, there are 14 well dened excellent breeds of milch cattle and 12 well known draught and disease resistant breeds of cattle.

Gir, Sindhi, Red Sindhi, Sahiwal, Tharparkar and Deoni are some of the outstanding breeds of milch cattle. The Gir is native of Saurashtra and is now found in several parts of Gujarat and adjoining Rajasthan. The Sindhi breed is mainly raised in Gujarat, Rajasthan and Maharashtra although it can be raised in several other parts of the country due to its disease resistant quality. The Red Sindhi breed has a distinct red colour and hails from Sind in Pakistan. The Sahiwal breed has its origin in the Montogomery district of Pakistan and is widely raised in Punjab, Haryana, Rajasthan, Uttar Pradesh and Delhi. The Deoni breed is widely raised in north-western and western parts of Andhra Pradesh.

Among the important draught breeds are included the Nagori, Bauchaur, Kenkatha, Malvi, Kherigarh, Hallikar, Khillari, Amritmahal, Kangayam, Ponwar, Bargur, and Siri. The Nagori breed is a native of Jodhpur and is found in large parts of Rajasthan., Haryana, U.P. and M.P. The Bauchaur breed is mainly found in Bihar.

Malvi is largely concentrated in the dry western parts of Madhya Pradesh. The Kenkatha or Kenwariya breed hails from Banda district of Uttar Pradesh and neighbouring areas of Madhya Pradesh. Kheri district of Uttar Pradesh is the habitat of the Kherigarh breed. The Halikar and Amritmahal breeds are indigenous to Tumkur, Hassan and Mysore districts of Karnataka but are spread all over the Peninsular India. Solapur and Satara districts comprise the home of the Khillari breed. The Bargur and the Kangayam breeds are the native of Coimbatore district of Tamil Nadu. The Siri breed urishes well in the hilly areas of Darjeeling and Sikkim.

Buffaloes thrive best in areas of warm and humid climate. Buffaloes are reared mainly for milk but some buffaloes are used as draught animals in certain parts of the country. Uttar Pradesh, Rajasthan, Andhra Pradesh, Madhya Pradesh, Gujarat, Punjab, Maharashtra, Bihar, Haryana and Karnataka have sizeable number of buffaloes.

Buffaloes are the main source of milk in India and provide 46 per cent of total milk of India against 6 per cent provided by cattle. Rest of the milk is obtained from other animals like sheep, goats, camels, etc. In addition to the fact that India has more buffaloes than any other country of the world: the Indian buffalo-breeds are some of the world’s best. The Murrah, Bhadawari, Jaffarabadi, Surti, Mehsana, Naguri and Nili Ravi are among the important breeds.

India stands sixth in sheep population in the world after Australia, Russia, China, Argentina and New Zealand. More than 4 per cent of the world’s sheep are reared in India. Most of the sheep are raised in regions which are too dry, too stony or too mountainous to be too good for agriculture or for cattle rearing. Most of the Indian sheep are of poor quality yielding inferior wool in less quantity. Their yield of mutton is also very low. Most of the sheep are found in the temperate Himalayan region (Jammu and Kashmir, Himachal Pradesh and Uttarakhand), dry north-west region (Rajasthan and neighbouring parts of Punjab, Haryana and western part of Uttar Pradesh, Gujarat and Madhya Pradesh), semi-arid southern region (Maharastra, Karnataka, Andhra Pradesh, Telangana, Tamil Nadu and parts of Madhya Pradesh) and humid eastern region (Bihar, West Bengal, Assam and Odisha).

Goat is called the poor man’s cow because it can be cheaply reared on meagre grass of poor quality. It is the major supplier of mutton along with milk, hair and skins. Goats are found in larger number as compared to sheep and are next only to cattle. About one-sixth of the world’s goats are reared in India. Although goats are found in almost all parts of the country, their major concentration is in Bihar, Rajasthan, West Bengal, Uttar Pradesh, Maharashtra. These states account for more than half the goats of India.