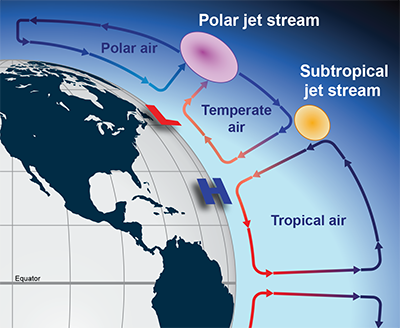 Jet stream is a narrow band of strong wind, usually blowing from west to east, in the upper layers of troposphere near the level of tropo pause, largely in the middle latitudes. It is essentially circumpolar in character and completely girdles the earth in a meandering course in both the hemispheres. In places it consists of several individual laments of high-velocity air, and in other parts the laments continue to form a single great stream of rushing air moving from west to east. These winds attain their highest velocities at elevations between 10 to 12 km. e wind velocity is highest at the core of the jet stream and it decreases towards its peripheries. Jet streams are normally 150 to 450 km. wide, 900 to 2150 metre thick with core speed exceeding 300 kmph.

Jet streams w at an average speed of 110 kmp in summer which increases to 190 kmph in winter. A jet stream is usually sinuous in character and is normally located at 30° –35° latitudes. In high troposphere the westerly winds increases in velocity from the poles towards the equator until they attain their maximum at about 30° latitude, after which they decline rapidly before reaching the region of easterly winds. Jet streams shift their position in accordance with season. They are at 35° – 45°N in summer and shift to 20°– 25°N in winter. Their velocities also change with the change of season, their average winter velocities being double than their velocity in summer. There are rapid horizontal changes in temperature with very low temperatures towards the poles and high temperature equator afterward.

There are different types of jet streams. Circumpolar or Polar Front jet streams are formed at the convergence zone of surface polar cold air mass and tropical warm air mass. They are most active at 300 millibar pressure within 40°– 60° latitudes. Convergence of two contrasting air masses leads to steep thermal gradient. They are very irregular with respect to their geographical location and there is a good deal of spatial differ in their location. They adopt a sinuous path at heights of 7.6-10.7km. between 30 and 70 latitudes. Tropical Easterly jet streams develop in the upper atmosphere above the easterly trade winds over India and Africa during the summer season.

They owe their origin to intense summer heating of the Tibet Plateau and play a significant role in the mechanism of Indian monsoon. Normally the winds blow at the speed of 100 kmph but sometimes their speed reaches 300 kmph. Stratospherical subpolar or Polar night jet stream develop in the stratosphere at the height of about 30 km. around the poles in winter season. They are formed as a result of steep pressure and temperature gradient. They become very strong westerly circulation during winters and their velocity increases considerably. However, during summer, their velocity decreases and their direction become easterly.

Air mass is a large body of air with fairly uniform properties of temperature and humidity. It acquires its properties by remaining stationary over a given area for long period, enough to come to equilibrium with the surface below. The properties of air masses (temperature, humidity, hydrostatic moisture content, stability and abundance of minor components) are determined by nature of underlying surface.

The air masses extend through many latitudes and cover thousands of square kilometres. The complete horizontal homogeneity of air mass is, therefore, rarely achieved. Small differences in the physical properties, such as temperature and humidity exist from one part to another at the same level. The air mass derives its characteristics mainly from its source region. As it moves away from the source region, it is modified by weather conditions prevailing along the route. As such the classification of air mass is based upon the nature of the source region and subsequent modifications to which it is subjected. The main source regions are: (i) Warm tropical and subtropical oceans; (ii) The subtropical hot deserts; (iii) relatively cold high latitude oceans; (iv) The very cold snow covered continents in high latitudes; (v) Permanently ice covered parts of the continents in the Arctic and Antarctica.

There are two basic air masses—Polar (P) and Tropical (T) with strong differentiation of temperature. They are in turn sub-divided into continental (c) and maritime (m) in terms of humidity. The conveniently used symbols are as follows:

The air is coined in broad high latitudinal stretches of Siberia and Canada. Typically frozen and laden with snow throughout winter season, the air masses located over this region are chilly, cold, and slightly modified in summer.

It is considerably wider than cT because of greater size. Pacific ocean, North and South Atlantic and Indian Ocean are extensive source areas for mT air. These air masses overlying the tropical seas are moist and saturated universally. They are pushed beyond the source areas and cause heavy precipitation and high temperature condition.