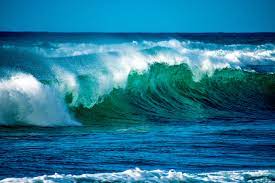 Ocean waves are oscillatory movements in water, manifested by an alternate rise and fall of the sea surface. Waves in the ocean water travel in some particular direction over long distances. It must be remembered that it is only the waves which travel further while the water particles remain at the same place. If a floating substance (such as a cork, a wooden piece or a ball) is thrown in the water, it will move up and down and to and fro with the approaching wave but will not travel with it unless it is blown away by wind.

Ocean waves are produced by the friction and pressure of winds on the smooth surface of the sea. The upper most part of a wave is called its crest while its lower most part is known as trough. The distance between two consecutive crests or troughs is known as wave-length. The time taken by two consecutive crests to pass any fled point is known as the   wave period. The vertical distance between a trough and a crest is the wave height. One half of the wave height is called wave amplitude. The number of waves passing a given point during one second time interval is known as wave frequency.

A tide is the periodic rise and fall in the level of the water in the oceans and seas and is caused by the gravitational pull of the moon and the sun. Due to its large size, the sun should attract more but because of its great distance from the earth, it is unable to exert much influence. On the other hand, the moon is much smaller than the sun but it is able to attract more due to its lesser distance from the earth. It is estimated that the tide producing force of the moon is 2.17 times stronger than that of the sun.

Tides do not rise to the same height every day. They are influenced by the relative position of the moon and the sun with respect to the earth. Accordingly two types of tides are recognised:

On the full moon and the new moon, the moon and the sun are almost in a line with the earth. Hence, they exert their combined pull on the earth. Therefore, on these two days tides are highest and are known as spring tides.

Regular movement of a mass of water in fairly dene d direction over great distances is known as current. Water in the current moves forward while water on its sides and below it remains more or less stationary. Thus, an ocean current can be compared with rivers on the land. But oceans are much larger than rivers.

Ocean currents are caused by a variety of factors and the important factors are prevailing winds, temperature differences, salinity differences, evaporation, rotation of the earth, shape of the coasts and change of season. Prevailing winds influence the ocean currents more than any other single factor. These winds blow consistently in a particular direction and drag the surface water due to the force of friction.

This leads to formation of ocean currents. Within the tropics there are trade winds blowing from the east. They are responsible for North Equatorial and South Equatorial currents owing from east to west. The temperate lands are under the influence of westerlies and the ocean currents flow from west to east. The best example of the influence of winds on the currents is found in the north Indian Ocean where the ocean currents change their direction with the seasonal change in the direction of monsoon winds. Usually there are two types of currents. Warm currents ow from areas of high temperature to areas of low temperature and cold currents w from areas of low temperature to areas of high temperature.