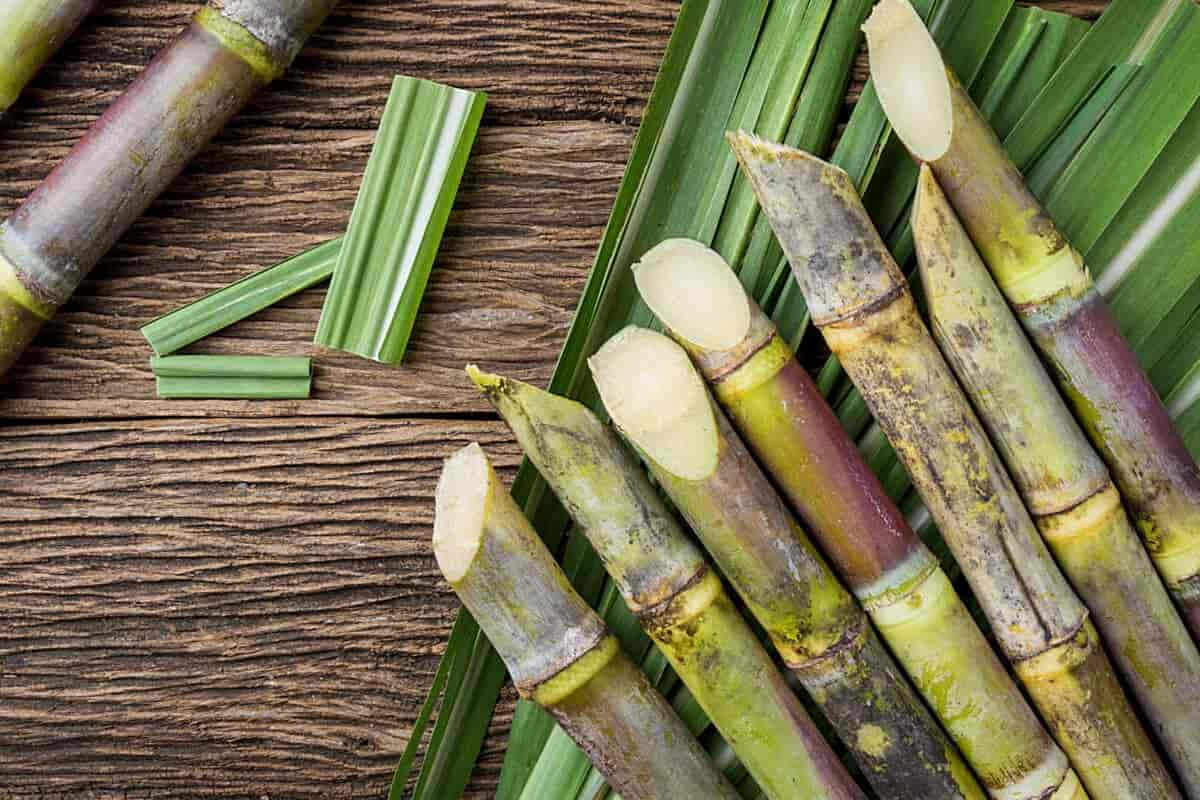 It belongs to bamboo family and can grow upto a height of 3.5 meters. It is indigenous to India. It is the most important source of sugar in the world. It is a long duration crop and requires 10 to 15 and even 18 months to mature. It requires hot and humid climate with average temperature of 21°-27° C and 75-150 cm annual rainfall. It can grow in a variety soils including loams, clayey loams, black cotton soils, brown or reddish loams or even laterites. It is a soil exhausting crop and requires heavy dose of manures and fertilizers. Flat plain or level plateau areas are ideal for its cultivation. Cheap abundant labour is a prerequisite for its successful cultivation.

Ratooning is the unique feature of this crop. In this system the sugarcane is cut leaving the root intact in the soil. Ratoon crop is the second or any other successive crop obtained from the roots left over in the field from the first crop. This is widely practised due to low inputs but the productivity decreases with each passing year and ratooning becomes uneconomical after one or two years.

Sugar-beet is root crop is the second largest source of sugar after sugarcane. It is temperate crop which requires 16°-23° C temperature for about three months and matures within 5-6 months. A well distributed rainfall of about 65 cm is enough for its growth but it can be grown in drier areas also with the help of irrigation. Deep, friable and fertile soil is essential for this crop.

Cotton is the most important crop in the whole world. Depending upon the length of the three different types of cotton can be recognised. They are

Frost is enemy number one of the cotton plant and it is grown in areas having at least 210 frost free days in a year. The average annual rainfall of 50-100 cm is sufficient but it can be grown in areas of less rainfall with the help of irrigation. Drier areas have the advantage of inhibiting the spread of pests such as bollweavil. It requires bright sun shine during the period of growth and cool weather at the time of ripening. It quickly exhausts the fertility of soil and is grown in mineral rich soil such as the regur or black cotton soil of the Deccan Plateau of India. Deep fertile soils with moisture retention are also favoured. Frequent dose of fertilizers is necessary for obtaining good yields. It is a labour intensive crop because not much machinery can be used for particularly for plucking.

Next to cotton, jute is the second most important breed crop. It is a strong and cheap breed which is obtained from the skin (bast or in bark) of a tall reed like plant. It is used for a large variety of purposes such as making gunny bags, ropes, strings, carpets, decoration pieces etc. Mesta is a substitute breed of jute. Kenaf is another substitute of the jute which is grown in several Asian countries especially in China and Thailand.

The conditions of growth are almost the same for jute and its substitute breed crops. Jute is a crop of hot and humid climate. It requires high temperature varying from 24° C to 35° C and heavy rainfall of 120 to 150 cm with 80 to 90 per cent relative humidity during the period of its growth. Light sandy or clayey loams are best suited soils for jute. Since jute rapidly exhausts the fertility of soil, it is necessary that soil is replenished annually by silt-laden flood water of the rivers. Thus river deltas are best suited for its cultivation. Large supply of cheap and skilled labour is also necessary for growing and processing the jute breed.

Flax is a breed crop which has been used for making linen cloth since ancient times. The breed is long and strong which is obtained from the stem of the plant. It is a temperate crop and requires 16° C to 18° C summer temperature. A fairly well distributed rainfall of 50 to 75 cm is best suited for its successful growth. It grows well in clayey or loamy soil of well drained level lands.

It is also a breed crop and its conditions of growth are similar to those of Canada, Russia, Ukraine, India and China are the main producers.

Is a breed derived from the leaves of a plant which grows in hot and humid climate of the tropical lands. It is almost entirely cultivated in the Philippines; hence the name Manila hemp.

Silk is produced from the silkworms which live on mulberry leaves. Rearing of silkworms is known is sericulture. It is a labour intensive activity and provides employment to a large number of workers. China, India and Japan are the main producers.

Tobacco is obtained from the leaves of a tropical broad leaved plant but is grown in a variety of climates. It requires more than 18° C temperature and 120-180 frost-free days for its proper growth. A fairly well distributed rainfall of 50 cm is suit for its growth. Although well drained, sandy and light sandy loams are suited, yet it can be grown on clayey black soils also.

These are seeds from which vegetable oil is obtained. Vegetable oils are important as an item of food and are used as raw material for perfumes, medicines, varnishes, candles, soaps etc. Groundnuts, soyabeans, coconuts, mustard and rapeseed, sesamum, sunwer etc are important sources of vegetable oils. Most of them are produced in the tropical areas but some of them are grown in the temperate lands also.