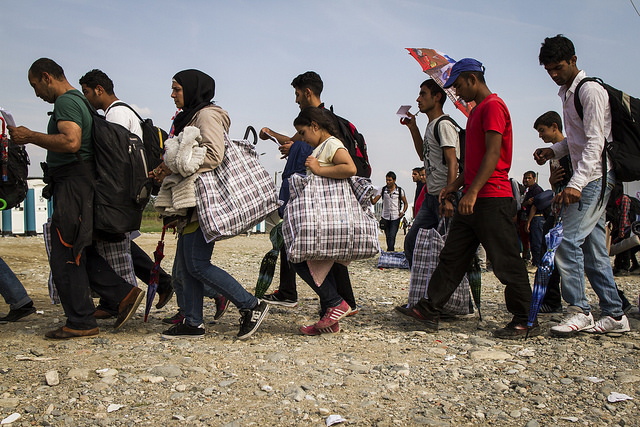 Migration refers to the movement of population from one place to another. Apart from birth rates and death rates, migration is the third most important factor which determines the population of an area. It has three fold impact: (i) on the area experiencing in migration (ii) on the area experiencing outmigration and (iii) on the migrants themselves. Migration is caused by a variety of factors of which pull factors and push factors are important.

Urban centres provide vast scope for employment in industries, transport, trade and other services. They also offer modern facilities of life. Thus, they act as ‘magnets’ for the migrant population and attract people from other areas. This is known as ‘pull factor’.

People also migrate due to ‘push factors’ such as unemployment, hunger and starvation. When they do not d means of livelihood in their home villages, they are “pushed’ out to the nearby or distant towns. Millions of people who migrated from their far-o villages to the big cities of Kolkata, Mumbai or Delhi did so because these cities offered them some promise for a better living. Their home villages had virtually rejected them as surplus population which the rural resources of land were not able to sustain any longer. Moreover, natural disasters like flood, drought, earth – quake, tsunami, wars, local conts etc. also give extra push to migration.

People migrate from the area which is prone to natural calamities like floods, droughts, earthquakes, volcanic eruptions, cyclones etc. These natural calamities are responsible for forced migration. Some people come back to their original place of residence but many of them migrate permanently.

Economic prosperity is the main force which drives people from their place of residence to their place of work. People migrate in large number from rural to urban areas in search of employment. The agricultural base of rural areas does not provide employment to all the people living there. Even the small-scale and cottage industries of the villages fail to provide employment to the entire rural folk. Contrary to this, urban areas provide vast scope for employment in industries, trade, transport and services.

Vast grasslands in the temperate zone were converted into agricultural areas which attracted people from the densely populated areas. Green revolution in India tempted many agricultural labourers from Bihar and eastern part of U.P. to migrate to Punjab. Negro slaves from Africa were transported to the U.S.A., Latin America and West Indies to work as labourers in plantations.

Marriage is a very important social factor of migration. Every girl has to migrate to her in-law’s place of residence after marriage. Thus, the entire female population of India has to migrate over short or long distance. Rural areas, by and large, lack educational facilities, especially those of higher education and rural people have to migrate to the urban centres for this purpose. Many of them settle down in the cities for earning a livelihood after completing their education.

Religious freedom is an important social cause of migration: Migration of a large number of Jews from Germany before the World War-II and their habitation in the newly created state of Israel are the result of religious causes.

Demographic factors like age, sex, population density, marital status etc. play an important role in migration of the people from one area to another. In most of the cases, adult males have better capacity to migrate than other groups of population. Millions of people had migrated for over two hundred years from densely populated Europe to almost vacant lands of North America. In India, a large number of people migrate from densely populated states of West Bengal, Odisha, Kerela, Bihar, U.P. and M.P. due to scarcity of resources in proportion to their population.

Political causes like colonization, war, government policies etc. had been playing vital role in migration during the historic times: World War I and II resulted in displacement of 6 and 60 million respectively. Due to partition of India in 1947; 6.5 million people Muslims le India for Pakistan and almost an equal number of Hindus and Sikhs left the new state of Pakistan for India. Similarly 3.5 millions Hindus migrated from East Pakistan (Now Bangladesh) and 1.0 Muslims migrated from India to Bangladesh. After the attack of the U. S.A. on Afghanistan in October 2001, and Iraq in 2001, millions of refuges had to migrate to Iran, Pakistan, Syria, Tajiakistan and Uzbekistan.

In 2015, millions of people had to the Syria due to war, cont and persecution. They have sought asylum in different countries of Europe and Asia