Landforms made by Glaciers 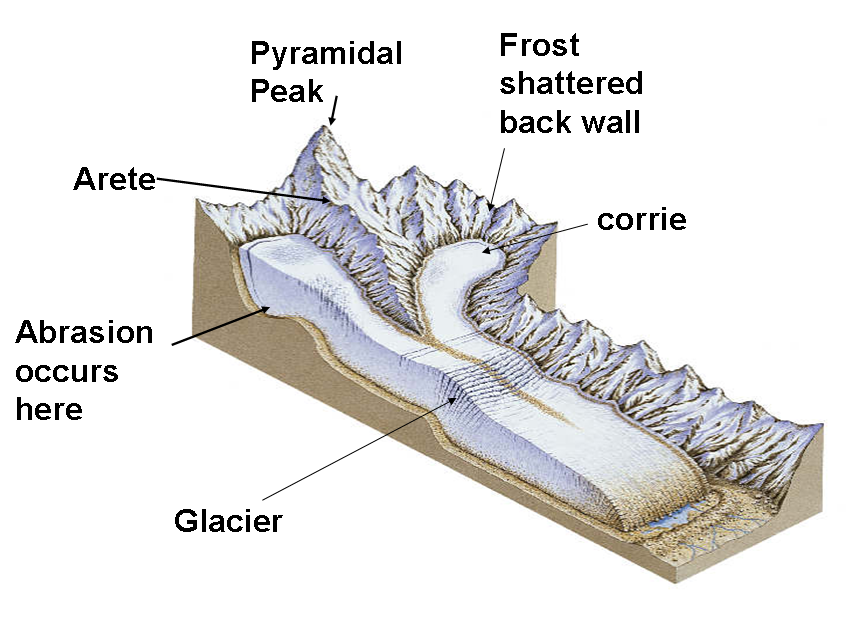 A glacier is a mass of ice moving outward from an area of accumulation. The work of glaciers is seen in cold areas where the amount of snowfall is more than the amount of snowmelt. Like river, a glacier does the work of erosion, transportation and deposition on the surface of the earth and forms a variety of landforms through these actions.

Types of Landforms Made by Glaciers

Cirque is a steep-walled rock basin on the side of a mountain resembling the shape of a vast amphitheatre or an armchair. It is open at one end, has at bottom and very steep slopes on three sides. It is separated from the main valley down its open end by a slightly higher ground. It is also called corrie, coire, combe, cwm and kar. Often water accumulates in a cirque forming a lake. Such a lake is called cirque or tarn lake. When several cirques erode cutting a mountain back towards a common height from different sides, a pyramedal peak is formed. It is known as horn because it resembles that shape. The Matterhorn peak of Swiss Alps is its best example. When two cirques from opposite sides of a hill develop and meet each other, a pass is formed. Many passes in the Alps were formed by glacial action. Some of the world’s passes are used for transportation. When the cirques from two sides of a mountain ridge are enlarged and they extend towards each other, the ridge top is eroded and takes the shape of a comb. Hence, it is known as comb ridge. Plucking of bedrocks by the overriding glacier leads to the formation of glacial trough, a channel of the valley glacier. The glacial trough, if filled up by water gives rise to trough lake.

Mountain glaciers cannot dig a new valley but deepen, straighten as well as widen the pre-existing valley by eliminating irregularities during its passage. Such a trough has steep sides and wider or. This enables us to see over a longer distance in a glaciated valley. The original V-shaped valley becoming narrower towards its head is turned into a U-shaped trough in this way. Glaciers have their tributaries like rivers. The main glacier erodes its valley much quicker and deeper as compared to the tributary or small glaciers. A steep slope develops at the confluence of the tributary glacier with the main glacier. After the snow melts, the water of the tributary glacier makes a waterfall when it enters the main valley and it seems that the tributary valley is hanging when seen from the or of main valley. This is known as hanging valley. A glacier does not avoid hard rock outcrops like clifalling along its path. It rides or was over them. While ascending the slope of the outcrop, its main action is that of abrasion as a result of which this slope becomes smooth, polished and gentle. Plucking is the main activity on the descending side which makes it rough and steep.

The rock swells which have a gentle slope and polished surface on one side but a rougher surface and steeper slope on the other side is known as Roche Moutonnes. From a distance these rock swells look like back of sitting sheep and are often termed as sheep rocks.

When the glacier melts, it starts depositing its sediments known as moraines. Moraines consist of the heterogeneous rock material of unsorted nature. It is a mixture of e sediments called glacier flour, angular stones and boulders of different sizes and shapes ranging from 15 to 20 metres in radius. e pile of such stones and boulders is known as glacial till. Material deposited on either side of the glacier is known as lateral moraine. When two glaciers join, their lateral moraines also join near their confluence and are called medial moraines. Many alpine pastures in the Himalayas like Margs of Kashmir occupy the sites morainic deposits of old valleys. Material dropped at the end of a valley glacier is in the form of ridge called terminal moraine.

Each time a glacier retreats, a fresh terminal moraine is le at a short distance behind the first one. Drumlins are peculiar type of low round hillocks which resemble the shape of an inverted boat or a half egg split lengthwise. They are often found in groups and is known as ‘basket of eggs topography’. Drumlins are smooth and elongated hillocks of boulder clay, with its long axis parallel to the direction of the moving ice which deposited it. Drumlins may measure upto 1 km in length and 30 m or so in height. One end of the drumlins facing the glacier called the stoss end is blunter and steeper than the other end called tail. Stoss end gets blunted due to pushing by moving ice.

Usually pebbles and other fragments are found lying over the glacier. When the glacier melts, pebbles and fragments subside and form a small depression. These depressio ns are called kettle holes. A large number of kettle holes are found in the prairies of North America. When glaciers melt in summer, the water was on the surface of the ice or seeps down along the margins or even moves through holes in the ice. These waters accumulate beneath the glacier was like streams in a channel beneath the ice. Such streams w over the ground (not in a valley cut an the ground) with ice forming its banks. Very coarse materials like boulder and blocks along with some minor fractions of rock debris carried into this stream settle in the valley of ice beneath the glacier and after the ice melts can be found as a sinuous ridge called esker.

A kame is formed by the sub-glacial streams and consists of assorted material–gravel and sands. Kames are asymmetrically arranged and follow the direction of ice front. Many ridges are formed at the glacier margin and are known as kame terraces. If melt-water of the glacial stream coming out of the ice tunnel under the snout of the glacier brings out the sediments to some distance, some sorting occurs. These snowmelt deposits make features like an alluvial fan, and delta-like outwash plain of sand and gravel. It is so named because the material has been washed out of the morainic deposit. Since it spreads over the valley bottom from side to side, it is also given the funny name of ‘valley trains’.