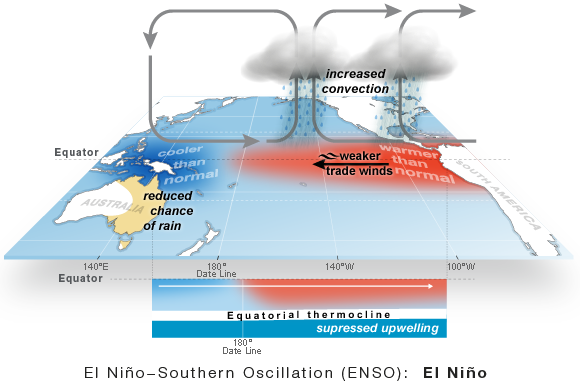 El-Nino is a narrow warm current which appears on the coast of Peru in December. In Spanish, it means The Child Christ because it appears around Christmas. It is a temporary replacement of the cold Peruvian or Humbolt current which normally flows along the coast. It appears once in every three to seven years and is responsible for wide spread floods and droughts i n the tropical regions of the world. Sometimes it becomes more intense and increases the surface water temperatures of the sea by 10° C. This warming of tropical Pacific water affects the global pattern of pressure and wind system including the monsoon winds in the Indian Ocean. The El Nino phenomena, which influence the Indian monsoon, reveals that when the surface temperature goes up in the southern Pacific Ocean, India receives rainfall.

El Nino has a great impact on the Indian monsoon and is used in India for forecasting long range monsoon rainfall. Meteorologists believe that the severe drought of 1987 was caused by El Nino. In 1990-91, there was a wild El-Nino event and the onset of southwest monsoon was delayed over most parts of the country ranging from five to twelve days.

After El Nino, weather conditions return to normal. However, sometimes trade winds become so strong that they cause abnormal accumulation of cold water in the central and eastern Pacific region. This event is called La Nina, which in effect is the complete opposition of El Nino. A La Nina also marks an active hurricane season. But in India, the presence of La Nina portends exceptionally good news. It is the harbinger of heavy monsoon showers in India.

Is the name ascribed to the curious phenomenon of see-saw pattern of meteorological changes observed between the Pacific and the Indian Oceans. It has been noticed that whenever the surface level pressure is high over the Indian Ocean, there is low pressure over the Pacific Ocean and vice-versa. When the winter pressure is high over the Pacific Ocean and low over the Indian Ocean, the south-west monsoons in India tend to be stronger. In the reverse case, the monsoons are most likely to be weaker. Different indices have been used to measure the intensity of the Southern Oscillation, but the most frequently used is the Southern Oscillation Index (SOI). This is the difference in pressure between Tahiti (17° 45´S, 149° 30´W) in French Polynesia representing the Pacific Ocean and Port Darwin (12°30´S, 131°E) in northern Australia representing the Indian Ocean. The positive and negative values of the SOI i.e., Tahiti minus Port Darwin pressures are pointers towards good or bad rainfall in India.