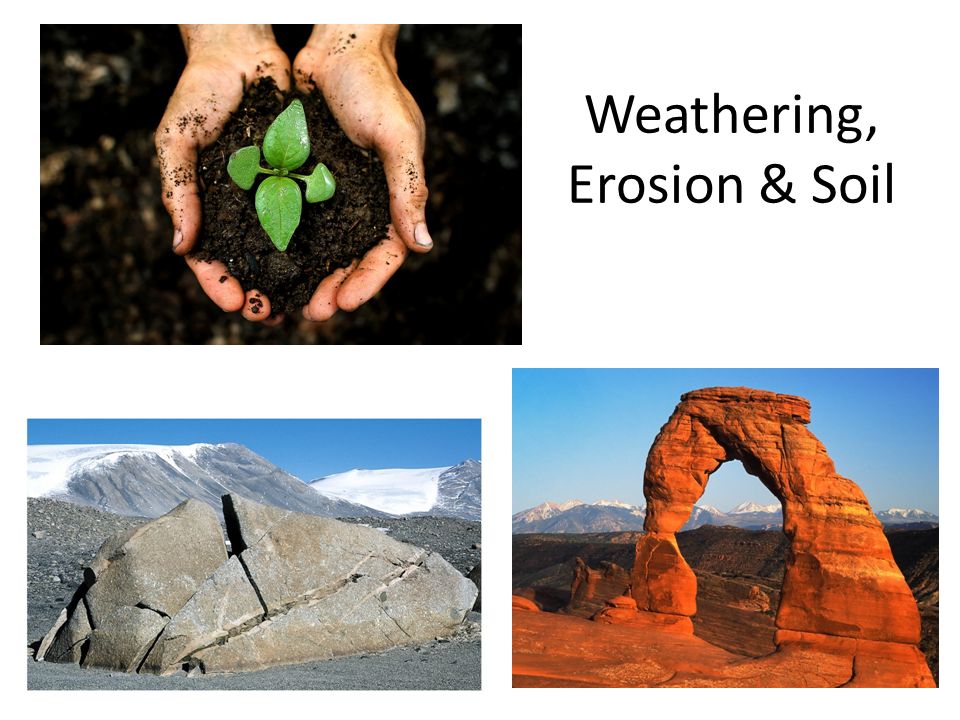 The external or extrusive forces act on the surface and are active in removing the irregularities caused by the endogenetic forces. These forces show their effects through weathering, erosion, transportation and deposition of rock material. The main agents of external forces are weathering, and work of river, glacier, wind, underground water and sea waves.

“Weathering is the mechanical fracturing and chemical decomposition of rocks, in situ, by the natural agents at the surface of the earth.”

Weathering is of the following three types:

Weathering by insolation is more prevalent in hot dry desert areas. This is due to rapid changes in daily temperature. The day temperature suddenly rises and the rocks expand. At night the temperature suddenly falls, sometimes close to freezing point, and the rocks contract. This alternate expansion and contraction of rocks leads to tension and creates a series of cracks or joints in the rocks splitting them into blocks. This is known as block disintegration.

Often rocks are made up of different minerals which expand and contract at different rates. This reduces the rocks to fragments and pieces. Weathering of rocks in this way is known as granular disintegration. The debris moves down the mountain slope and goes on gathering at its foot as talus or scree. One frequently hears the sounds like the shot of a gun in the desert areas within half an hour of sunset. These sounds are created by the breaking of the rocks.

Some rocks are not good conductors of heat. Consequently, the expansion and contraction is more in the outer rock layers than in the inner ones. The outer layers are thus peeled from the main mass of the rock in the form of concentric shells. This is just like peeling o layers of an onion. This process is known as exfoliation. In rocks like granites, smooth surfaced and rounded small to big boulders called tors form due to such exfoliation.

Frost is a very active agent of weathering in cold climates of high altitude and high latitude areas. e cracks and joints in the rocks are filled with water during day time and this water is frozen at night when the temperature falls below freezing point. The volume of water increases by about 9% on freezing. On an average 9 cubic inches of water turns into 10 cubic inches of ice. This increase in volume exerts a burs ting pressure of about 150 kg. The rocks are ruptured and fragments are wedged apart. Next day more water can enter the already widened cracks and more pressure can be exerted on the rocks when the water freezes the next night. This alternate freezing and melting is known as freeze-thaw. It is necessary that the mercury must oscillate around freezing point for weathering by frost to be effective.

The decomposition of rocks by chemical action is called chemical weathering. The minerals in rocks undergo a chemical change by the action of air and water. The chemical reactions are rapid in hot and humid climate of the tropical zone.

Following are the main processes of chemical weathering:

The effect of oxygen in air and water on the rocks is called oxidation. The atmospheric oxygen in rain-water unites with minerals in the rock especially with the iron compounds. This results in decomposition of the rock and it starts crumbling. The colour of the rock changes into red, yellow or brown as we see in rusting of iron.

When the carbon dioxide mixed in water affects the rocks, it is known as carbonation. This has acidic effect and dissolves the calcarcous rocks such as limestone, marble and gypsum. The underground water dissolves limestone on a large scale in Yugoslavia. It is estimated that carbonation lowers the level of limestone areas in wet climate at the rate of 5 cm. per thousand years.

When the hydrogen of the water dissolves the rocks, it is known as hydration. There are certain minerals in the rocks which increase their volume and become heavy when they absorb water containing hydrogen. The rocks break due to increased pressure and their colour also changes. Feldspar is converted into Kaolin as a result of hydration.

The rain water is able to dissolve certain minerals and leach the soil. This is called solution. Some minerals, such as rock-salt and gypsum, are removed by the process of solution by water.

This includes the action of animals and insects, vegetation and man. There are millions of animals and insects such as dogs, rabbits, rats, jackals, termites, etc. which consume large quantities of rock and soil for making their habitats and for extracting food. s weakens the rocks and they tend to disintegrate. According to Arther Holmes, “In an average soil, there may be 1,50,000 worms in one acre, and in the course of a year they raise 10 to 15 tonnes of finely comminuted materials to the surface. The excretions of many of them provide acids for a gradual decay of rocks.”

The long and tenacious root fibres of the plants work down into the cracks of rock. Even roots of shrubs and trees reach deep into them and dislocate large blocks from the cliffs.

The quarrying, mining, deforestation and indiscriminate cultivation of land are some of the important actions of man which contribute to the weathering of rocks.