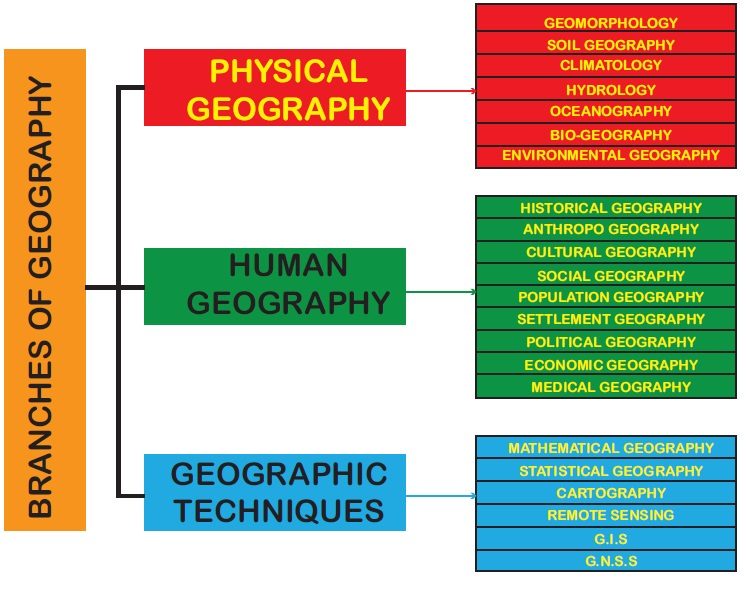 Geography is a discipline which studies the earth’s surface from two perpectives; systematic and regional. us, geog raphy may be studied either as systematic geography or as regional geography.

In systematic geography, we select one geographical factor and study its distribution for the whole world or a part thereof. Our attention is concentrated on a particular geographical factor. Relief, drainage, climate, vegetation, soil, mineral wealth, agriculture, industry, transport, trade and commerce and population are some of the important geographical elements. ese elements are studied separately with reference to a particular area. s area could be a country, a continent or the whole world. s method of studying geography is also known as ‘topical approach’ because dierent topics or element complex is our main concern. e best way to study systematic geography is to consider the variations on the surface of the earth with reference to a particular geographical element. Some geographers call it General Geography also. e main advantage of systematic geography is that some elements are selected in their total reality and concentration is focussed on the distribution and analysis of these elements.

Regional geography considers the area as a whole first and aims at identifying those geographical factors or components which in their unison create the distinct character of the region. The geographical conditions are not the same everywhere. The areal differentiations are so sharp that no two regions are the same. Regional geography helps us in identifying the region. For intense study, larger regions are further divided into smaller regions. For example, if we take Ganga Plain, Chhotanagpur Plateau or Assam Valley, rather than taking whole of India, and study their location relief, drainage, climate, soils, vegetation, mineral wealth, agriculture, industry, transport, trade, population, etc. it will be termed as regional geography. Thus, in regional geography, the main emphasis is on the region.

Branches of Geography Based on Systematic Approach

It is concerned with atmosphere and involves the systematic study of climate and its constituent elements like temperature, rainfall, atmospheric pressure, winds, storms etc. and their areal distribution over the globe.

Oceanography is the science of the sea which embraces primarily the study of the form and nature of the oceanic basins, the characteristics of the waters in these basins and the movements to which these waters are subjected to.

It is branch of geography is concerned with the formation of soils, their types and their areal distribution.

Human geography is concerned with the study of cultural or man made features such as houses, villages, towns, cities, railways, roads, bridges etc. Human geography is a vast subject and has the largest number of branches.

Some of the important branches of human geography are described as under:

It is concerned with the study of society and its spatial dynamics. It also studies the cultural elements contributed by the society.

It studies the historical development of a region. Every region has to undergo certain historical experiences before it attains its present status. Most of the geographical features experience changes with the passage of time and these form the concerns of historical geography.

As its name suggests, political geography is concerned with the political events and studies boundaries, space relations between neighbouring political units, delimitation of constituencies, election scenario etc. and develops theoretical framework to understand the political behaviour of the people.

It is the study of distribution of species and ecosystems in geographic space and through geographical time.