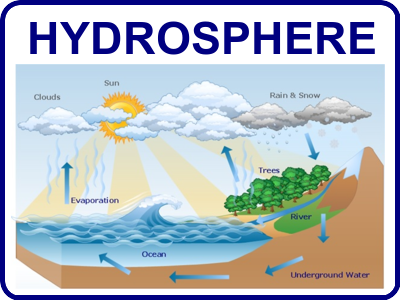 Hydrosphere consists of the water component of the earth which includes oceans, seas, glaciers, lakes, ponds, rivers, streams and underground water. It is estimated that 71 per cent of the total surface area of the earth is covered by water and the land area accounts for only 29 per cent of the total surface area of the earth. It is on account of abundance of water on its surface that the earth is often called a water planet or blue planet. The volume of the world ocean is estimated to be about 1367 million cubic kilometres which is almost 97 per cent of the world’s free water. Such a vast quantity of water can cover the entire globe by a 3.25 km thick layer of water if spread uniformly over the earth’s surface.

Water is present in lithosphere, hydrosphere and atmosphere in all its three forms i.e. solid, liquid and gas. It is never static and exists in dynamic condition changing its form and place. Evaporation takes place at the oceanic surface. Water vapours in the atmosphere are condensed and help in the formation of clouds which result in rain, hail, dew, snow or sleet. Some of the precipitation, after wetting the foliage and ground, runs over the surface to the streams. The water which flows in streams causes erosion and excess of water causes floods. Some water soaks into the ground. This water is used for growing plants and is also available for evaporation.

Some reaches the deeper zones and percolates and seeps to maintain the streams during dry period. The streams, in turn, eventually, return the water back to the oceans where it originated from. This never ending circulation of water from ocean to the atmosphere, thence to land and back to the oceans is called hydrological cycle. Thus the hydrological cycle interconnects the lithosphere the hydrosphere and in atmosphere.

Oceans of the World

A look at the world map indicates that about 71% of the earth’s surface is covered by oceans. The main oceans of the world in descending order of area and volume are Pacific Ocean Atlantic Ocean, Indian Ocean, Southern Ocean and Arctic Ocean.

The floor of the oceans is not plain, rather it is very rugged and complex consisting of world’s longest mountain ranges, deepest trenches and largest plains. This great variety in the relief of the ocean or is largely due to interaction of tectonic, volcanic, erosional and depositional processes.

In addition, there are many associated features including ridges, hills, seamounts, trenches, canyons, deeps and fracture zones. Important features of ocean floor are shown in Fig. 4.1.

Continental shelf is slightly inclined, inundated zone which structurally forms the border of a continent. It is generally formed by the drowning of part of a continent with a relative rise in sea-level, or marine deposition beneath the water. It has a gentle slope which is less than 1° and its maximum depth is normally 200 metres. Its width varies with its slope. The continental shelf of steep slope is narrow while that of gentle slope is quite broad. Its average width is about 70 km. It is almost absent in the eastern Pacific, especially in South America. Along the eastern coast of the USA, it is 120 km wide. Its maximum width is o the Arctic Coast of Siberia where it is 1,287 km wide. It covers about 7.5% of the total area of world’s ocean.

At the edge of the continental shelf, the seaward slope immediately becomes steep and the angle of slope varies between 2° and 5°. This part with steep slope is known as continental slope. It extends to a depth of about 3,660 metres.

Beyond the continent slope is the continental rise. It is an area of gentle slope varying from 0.5° to 1°. Its general relief is low. With increasing depth, it virtually becomes at and merges with the abyssal plain.

Where the continental rise ends, the deep sea plain known as abyssal plain or abyssal floor begins. These are almost at areas with gradient less than 1°. Their depth varies from 3,000 to 6,000 metres. They are extensive areas covering about 40% of the ocean or. They are present in all the major oceans and several seas of the world.

Apart from the above four major relief features of the ocean floor, there are some other important features also:

These are under water mountain ranges which are a few hundred kilometres wide and several thousand kilometres long. They are ridges of high relief and form the longest mountain system on the earth. Most of the ridges are placed centrally in the oceans. Mid-Atlantic Ridge is the best example. The total length of the submarine ridge system is over 75,000 km.

There are thousands of hills on the ocean floor which are submerged under ocean water. A submarine mountain or peak rising more than 1,000 metres above the ocean or is known as a seamount. Flat topped seamounts are known as guyots. All these features are of volcanic origin. Pacific ocean has the largest number of seamounts and guyots. It is estimated that there are nearly 10,000 abyssal hills in the Pacific ocean alone.

A trench is a long, narrow and steep sided depression on the ocean or. Trenches are the deepest parts of the ocean bottom with their usual depth of 5,500 metres. e deepest trench of the world is the Marina trench of the Guam Islands which is over 11 kilometres deep. If the Mt. Everest were to be submerged in this trench, its peak would still remain three kilometres below the sea-level. So far 57 trenches have been located out of which 32 are in the Pacific Ocean, 19 in the Atlantic Ocean and the remaining 6 are in the Indian Ocean.

A submarine canyon is a steep-sided depression on the sea-floor crossing the continental shelf, slope and sometimes continental rise as deep as abyssal waters. The largest canyons in the world occur in the Bering Sea of Alaska. They are the Bering, Pribilof and Zhemchug canyons. Hudson Canyon is the best known canyon in the world. It begins near the mouth of the Hudson river and extends into the Atlantic Ocean.