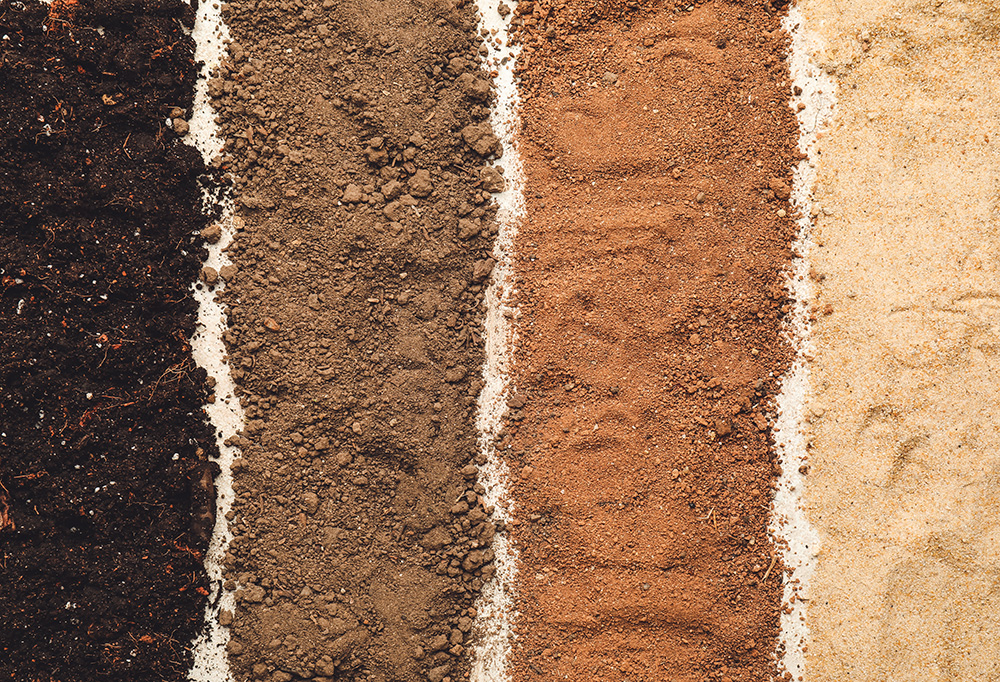 “Soil is the thin surface-layer on the earth, comprising mineral particles formed by the break down of rocks, decayed organic material, living organism, soil water and soil atmosphere.” There are five major factors of soil formation which are described below:

The underlying rock containing minerals is called bed rock or parent material. The soil-forming material is obtained by the weathering of this rock. Although all the three types of rocks (igneous, sedimentary and metamorphic) provide soil-forming material, it is largely derived from the sedimentary rocks because these rocks are widely distributed on the earth’s surface. The colour, structure and mineral contents of the soil depend upon the parent material.

The climate of an area is a major factor of soil formation. Parent material is more important for short period but climate becomes more important during longer duration. Two different parent materials may develop the same soil in one type of climate. For example, sandstone and granite are two different rocks in Rajasthan but they have given birth to same type of sandy soil under arid climatic conditions. Similarly, same parent material may form different types of soils under different climates. For example, the crystalline granite produce laterite soils in moist climate of Rajmahal hills and clayey soil in the dry climate of Andhra Pradesh.

It includes trees, shrubs, grasses and mosses. The decay of leaves and roots of different forms of vegetation provides humus to soil which increases its fertility. is provides life to new plants. It increases chemical action and the rate of soil formation also increases. Humus also quickens the weathering of minerals in the process of soil formation.

Bacteria acts differently in different climates and forms different types of soils. Bacteria lives on humus. In humid tropical climate, bacterial activity is intense. Consumption of humus is so much that soils are left poor in it. In cold climate, bacterial activity is limited and the soils are rich in humus. Bacteria also changes nitrogen from air into a chemical form which is usable by plants. at is why bacteria is termed as nitrogen-fixing agent.

Burrowing animals like ants, rodents, termites and some birds move the surface soil downwards and the sub-soil from its lower horizon upwards. The mixing of two soil layers helps in improving the texture and its aeration. Small organisms like earthworms live in millions in the soil and help in reducing its grains to small size and in mixing the mineral and the organic matter.

Elements of topography (such as altitude, relief and slope) affect the deposition and erosion of soil and the run-o of the water. On steep slopes, there is lot of erosion by river, glacier and wind and only a thin layer of coarse soil is less is known as residual soil. This eroded material is deposited in areas of gentle slope and a thick layer of soil is formed. Such soils are very fertile because they are formed from different kinds of rocks from over a wide catchment. But in certain at areas, the soils are poorly drained and suffer from leaching (downward movement of salts). Thus, the best soils are found in areas of gentle slope with good drainage.

Time is an important factor in the formation and development of the soil. The process of formation of soil is very slow. One to two centimetres thick stable soil cover may take thousands of years to form under the most favourable conditions.

The characteristics of soil undergo drastic changes with the passage of time. There are three stages of the development of soil—1. Young stage, 2. Mature stage, and 3. Old stage

The fresh river alluvium or glacial till are soils of the young stage. They have a greater control of the parent material and have a poorly developed soil profile. Mature soils are developed over a long time. The influence of climate and of organic matter is clearly visible on the mature solids. They have well-developed soil profile. With further lapse of time, humus is properly mixed with soil and its colour changes. The importance of parent material is almost over and the soil attains its old stage. Soils of old stage are found in the tropical lands and are one to six million years old.

Immediately below the A-Horizon lies the B-Horizon. This is known as sub-soil and contains weathered rock material, sand, silt and clay. This is also known as zone of illuviation. The upper and lower parts of this zone are called transitional zone and colloids respectively.

This is the third layer and consists of weathered parent rock material.

It contains un weathered parent rock. This is also known as bedrock. s is not a part of the soil profile but provides base to the other three horizons.