Rail Network in the World 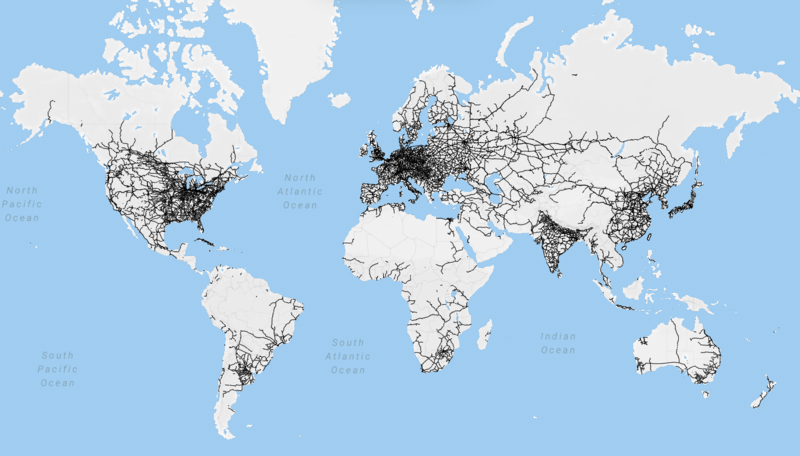 Europe has one of the densest rail network in the world. There are approximately 4,40,000 km of railways, most of which are double or multiple tracked. Important railheads are Paris, Berlin, London, Brussels, Milan, Warsaw and Moscow. Industrial regions of Western Europe exhibit greatest railway densities. Belgium has the greatest density with one km of railway for every 6.5 sq. km of the country. Passenger transport by rail is more important than freight in many European countries. Underground railways are important in London, Paris and Moscow. Channel Tunnel, operated by Euro Tunnel, Groups through England connects London with Paris.

Australia has about 40,000 km of railways, of which a quarter are found in New South Wales. Most of the railways are connected to the coastal areas. There is one trans-continental line running from Perth to Sydney; passing through such towns as Kalgoorlie, Adelaide, Canberra and Melbourne. A major North-South line links Adelaide and Alice Spring but as yet this has not been joined to the line from Darwin to Birdum.

New Zealand’s railways are mainly in the North Island linking the main towns of farming areas. In South island railway construction is hindered by the rugged terrain, but one east-west railway runs between Christ church and Greymouth.

In South America, the pampas of Argentina and regions of Coee Fazenda in Brazil have dense r ailway network. Out of a total of 1,12,000 k m of railways, the Argentina pampas has 43,000 km and coee growing region of so uth-east Brazil accounts for 34,600 km long railways. ere is only one trans-continental railway in South America linking

Buenos Aires (Argentina) with Valparaiso (Chile) through the Uspallata Pass across the Andes located at a height of 3,960 metres above mean sea-level. Of the remaining countries only Chile has a considerable length of railway lines, running from Iquique to Puerto Montt, with branch lines that link coastal ports with mining sites in the interior. The railway routes of the other Andean states, e.g. Peru, Bolivia, Ecuador, Columbia and Venezuela are short and consist mainly of single line from ports to the interior with no inter-connecting links.

In spite of the fact that Africa is the second largest continent of the world after Asia, this continent has only 40,000 km of railways. Some of the more important routes include the Benguela Railway through Angola to Katanga-Zambia copper belt; the Tanzania Railway from the Zambian copper belt to the sea at Dar-essalaam, and the railway through Botswana and Zimbabwe linking the landlocked central African states to the South African system. Elsewhere, as in Algeria, Senegal, Nigeria, Kenya, Ethiopia, railway lines run from coastal ports to island centres but do not form a good network or link with lines in other countries. South Africa, with 18,000 km of railways has the densest rail network because of the gold, copper and diamond mining activities.

Territory from going out of the Federation of States.

Following are the main trans-continental railways lines of the world.

Trans-Siberian is the world’s longest railway line which joins St. Petersburg (Leningard) in the west to Vladivostok in the east. It covers a total distance of 9,322 km. Its construction started in 1891 and was completed in 1905 afterr 14 years. The main stations on this route are Moscow, Ryazan, Ufa, Chelyabinsk, Kurgan, Petropavlovsk, Omsk, Novosibirsk, Kransnoyarsk, Tayshet, Irkutsk, Chita and Khabarovsk.

This is the most important railway route of Canada. It was constructed in 1886. The total length of the constructed and the proposed track is 7,050 km. It connects Saint John on the Atlantic coast in the east of Vancouver on the Pacific coast in the west. Important stations on this route are Montreal, Sudbury, Fort William, Winnepeg, Regina, Medicine Hat and Calgary.

The Union and Pacific Railway

This rail-line connects New York on the Atlantic Coast to San Francisco on the Pacific Coast via Cleveland, Chicago, Omaha, Evans, Ogdan and Sacramanto. Ores, grain, paper, chemicals and machinery are the main items transported on this line.

This is the most important railway route of Australia which connects Sydney in the east with Perth in the west. Main stations on this route are Broken Hill, Peterborough, Port Pirie, Port Auguste, Forrest and Kalgoorlie. This railway route has different gauges which results in loss of time and increase in cost of transport. It takes about been days for goods to reach from Sydney to Perth which can be covered in less than five days on a single gauge. Rail standard isolation Committee has been set up to overcome this difficulty . Another major north-south line connects Adelaide and Alice Spring and to be joined further to the Darwin-Birdum line.

This line runs from Paris to Istanbul passing through Strasbourg, Munich, Vienna, Budapest and Belgrade. The journey time from London to Istanbul by this Express is now reduced to 96 hours as against 10 days by the sea-route. The chief exports on this rail-route are cheese, bacon, oats, wine, fruits, and machinery. There is a proposal to build a trans-Asiatic railway linking Istanbul in Turkey with Bangkok in Thailand via Iran, Pakistan, India, Bangladesh and Myanmar.