Landforms Made By Wind 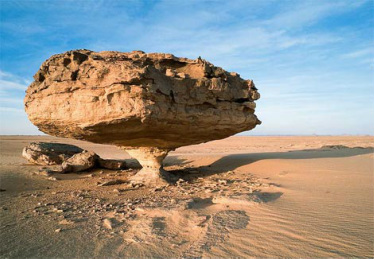 Work of wind is more prominent in desert areas where soil particles are loose due to lack of moisture and vegetation. A plenty of loose material is provided to be picked up by the blowing wind. Topography created by the erosional and depositional work of wind is called aeolian topography. Erosional work of wind depends on the velocity of wind and the length of time it continues to blow over the land surface. Wind performs its erosional work in a variety of ways. Firstly, the sand grains wear away the rock by abrasion, polishing or scouring the rock surface just like a sandblasting machine. Secondly, the loose surface material is blown away by wind from land through a process known as deflation. Polished rock surfaces and boulders having big cavities in them are often observed in deserts facing the direction from which the wind blows. Sand moves in a layer only a few centimetres or the ground at the most. The grains make long leaps downwards. The process of leaping by rebound is called saltation.

Types of Landforms by Wind

Pediments are gently inclined rocky floors close to the mountains at their foot with or without a thin cover or debris. These are formed as a result of erosion of mountain front through a combination of lateral erosion by streams and sheet flooring. Once the pediments are formed, the steep wash slope and free face retreat backwards through parallel retreat of slopes and the pediments extend backwards at the expense of mountain front. Gradually the mountain gets reduced leaving an inselberg which is a remnant of the mountain. In this way, high relief in the desert areas is reduced to low featureless plains called pediplains. Playa is an inland drainage basin with shallow saline lake of fluctuating volume, encircled usually by mud sheets. Water remains for a short period only due to high rate of evaporation in dry climate of the desert. Quite often the playas contain deposits of salt and such playas are called alkali flats. Many depressions are formed by deation action of wind. These depressions are called deation basins. In several desert areas which lack vegetal cover, strong winds form eddies and blow away the loose and so rocks. Consequently a saucer-shaped depression is formed which is known as blow out. There are many blow outs in Nebraska and Colorado states of the U.S.A.

The maximum erosion of an upstanding mass of rock occurs slightly above its ground level, where friction close to the ground is absent and sand content in air is yet high. The intensity of cutting into the rock decreases, both upwards as well as downwards from this level of maximum erosion by wind. Due to greater erosion of the lower portion, the rock assumes the form of a mushroom. The characteristic mushroom blocks, undercut at the base, are known as gaur (singular gara) in Sahara. These rocks are also known as Pedestal rocks. The isolated granitic rock masses near Jodhpur in Rajasthan are found similarly undercut giving them a characteristic mushroom form. Pedestal rocks near Dujasar, north-west of Jaisalmer are also noteworthy. The rate of erosion is dierent when hard and sorocks are arranged in almost horizontal layers parallel to each other. The lower sorocks are eroded fast but the upper hard rocks look like tables on sorocks which are known as Zeugen. A series of sharp, irregular rock crests, separated from one another by deep grooves is known as yardang. It forms where the wind blows steadily over vertical or slightly tilted alternations of hard and so rocks. The so rocks are eroded and form long furrows between deeply undercut, overhanging ridges of hard rock. As a result of erosional work of wind, much of sand and dust is eroded but some rock masses stand out here and there from the surface of the desert. Such a feature is known as inselberge. Inselberge is a German word which means ‘island mountain’, i.e., inselberges look like island situated in the sea. The inselberges are also known as Bornhardt after the name of the scientist who first explained their origin. Sometimes these hills are like pyramids with a cap of hard rock and sometimes they are dome-shaped having been made out of granite.

When the velocity of the wind decreases, it starts dropping its load. Some of the important depositional features due to depositional work of wind are the sand dunes and loess deposits. A sand dune is the most important feature formed by the depositional work of wind. It is a mound, a hill or a ridge of sand with a crest or a dete summit. When the carrying capacity of sand laden wind is reduced due to reduction of its speed, it deposits its material whenever some obstacle comes in its way. The obstacle may be a bush, a rise in ground, a boulder, a fence, a house or even the skeleton of dead camel. A dune hasa long and gentle windward slope and a much steeper leeward slope.

Barchan is the typical sand dune with a crescent-shaped front, having two horns or winds towards the leeward slope. It has a convex windward side. Barkhan is a Turkish word meaning a sand hill in Kirghiz Steppes. As the extremities of this dune move more rapidly than the middle portion, it gives it such a characteristic shape. A constant wind direction and a limited supply of sand are two essential conditions for the formation of Barchan.