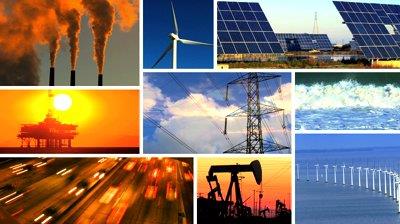 Coal is the inflammable organic substance composed mainly of hydrocarbons found in the form of sedimentary rocks and capable of being used as fuel to supply heat or light or both. Most of the coal resources of the world were formed during the carboniferous period (280 to 350 million years ago) due to effect of heat from below and pressure from above on the vegetation buried under the sediment. The quality of coal is determined by its carbon content. Four types of coal are usually recognised.

Coal reserves are found in more than 70 countries of the world but the major coal reserves occur in the U.S.A. (35° %, Former U.S.S.R. (19%), China (13%), and South Africa (7%). e major producers of coal in the world are China, U.S.A., India, Australia and the Russian Federation. Lignite is mainly produced in Germany, Russian Federation and U.S.A.

Petroleum is a liquid fuel obtained from within the earth and is also called mineral oil. It is a widely used source of energy and occurs mainly in the sedimentary rocks. It is lighter than coal, gives more energy, can be easily transported by pipelines and tankers and can be used upto the last drop. Mixture of hydrocarbons, petroleum is believed to be of organic origin and is the result of decomposition of tiny marine creatures, minute plants and animals which were buried under the sediments about 100-200 million years ago. It is found in the pore spaces of sedimentary rocks. Saudi Arabia, U.S.A., Russia, and Iran are the chief producing countries. The main exporters of petroleum are Saudi Arabia, Iran, Venezuela, Russia and Norway, while the leading importers are U.S.A., Japan Germany and Korean Republic, India.

Like mineral coil natural gas consists mainly of methane and is usually found in association with mineral oil and sometimes in the coal beds also. But it may also occur separately. It can be easily transported with the help of pipelines and is gaining popularity as a clean and convenient fuel in the present day world. Vast reserves of natural gas occur in Russia, Saudi Arabia, Algeria, Iraq, Indonesia, Australia and Malaysia. The chief producers are Russia, U.S.A., Canada, Netherlands and Indonesia. The main exporters are Russia, Canada and Algeria while the leading importers are U.S.A. and Germany in those parts of the industrial world where geographical conditions are not suitable for generating hydro-electricity. Further its gestation period is much shorter as compared to hydro-electric power projects and it has become an important source of energy. However, it has its inherent disadvantages because it consumes precious fossil fuels which have limited supply and also its production leads to environmental pollution. At present it is one of the major sources of energy in a large number of countries including India. e highest con centration of thermal power plants is found in Western European countries and in the eastern parts of North America. U.S.A. is the world’s leading producer and consumer of thermal electricity. is country is followed by Russia, Japan and Germany.

Hydro-electricity is produced by using the potential energy of water falling from a certain height. The falling water spins the turbine blades and energy is produced. It is a clean, eco-friendly, and renewable source of energy which can be transmitted through electrical wires. Continent wise Africa has the largest hydropower potential accounting for about 41% of the total world potential. Africa is followed by Asia (23%), North America (13%), Europe (11%), South America (8%) and Oceania (4%). However, actual production differs widely from the potential due to variations in the economic growth. With about 41% of the total world production, North America is the largest producer of hydro-electricity in the world. This is followed by Europe (40%), Asia (14%), South America (3%), Oceania (1.4%) and Africa (0.6%). Some of the European countries, Japan and U.S.A. have developed much of their power potential to generate hydro-electricity. Brazil, Canada, and Venezuela are some of the other countries which depend heavily on hydro-electricity. Paraguay produces 100 per cent of its electricity from hydro-electric power and exports 90% of its production to Brazil and Argentina. Among the European countries, Norway (99.5%), Luxembourg (99.1%), Ireland (89.5%), Latvia (77.5%) and Switzerland (55.0%) produce more than half of their energy resources as hydro-electricity.

Energy contained within the nuclei of the atom is called nuclear energy. Heavy metals like uranium, thorium, radium, plutonium and lithium are the sources of nuclear energy. However, uranium is the most important source of nuclear energy. There are more than hundred known uranium bearing minerals containing varying amounts of uranium oxide of which pitchblende, uranite, samarskite and thorianite are of greater importance: U.S.A., France, Germany, Russia, U.K., South Korea, Ukraine etc are the main producers of nuclear energy.