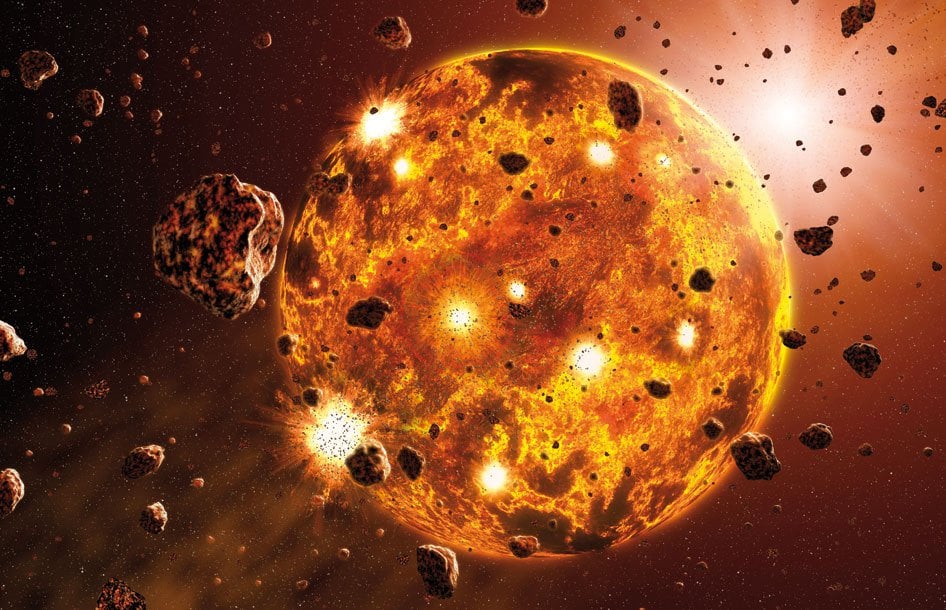 Also know as Expanding Universe Hypothesis, it can be credited to Edwin Hubble who provided evidence of expanding universe n 1920. is theory was postulated in 1950s and 1960 s and validated in 1972. According to this theory everything in the universe emerged from a point known as singularity, about 13.7 billion years ago.

The galaxies moved apart as the space between them expanded (A galaxy is a large rotating aggregation of stars held together by gravity). Obviously the universe was much smaller in the beginning. As the universe expanded the hot radiation in the original rewall also expanded and cooled down. Misty clouds of matter already existed. As those clouds collapsed upon themselves they were pulled together by their own gravity and formed clusters of galaxies with the galaxies themselves breaking up into stars like those of the Milky way. The stars might have broken up to form their planets like those of our solar system.

The earth has passed through dierent geological stages ever since it assumed solid surface. The main purpose of studying the geological history of the earth is to establish the succession of geological events and to work out a ‘geological time scale’. “The geological time scale refers to the chronological programming of various geological forms and forms of life in the past according to their time and place of origin, evolution and extinct. In other words it deals with the distribution of rock formations and animals since the beginning of life on the earth.” On the geological scale, the longest time span is called an era which is divided into periods. The period in its turn is divided into epochs. s division is like years, months and days in a calendar.

Shape and Size of the Earth

Difference between sphere and spheroid

These are imaginary lines, rather circles drawn on a globe or a map to know the exact location of a specipoint on the earth’s surface.

The development of the earth and life on the earth. At the top of the chart is earth’s recent history and at the bottom is given its earliest history. The equator is the initial line indicating 0° latitude. All other latitudes are measured with reference to the equator. The latitude of a place is its angular distance along a meridian on the earth’s surface, as measured from the centre of the earth. If a place is located in the northern hemisphere and makes an angle of 30° along meridian, as measured from the centre of the earth, then the place will have a latitude of 30° north. Line joining places of equal latitude is known as parallel of latitude. Equator is the longest parallel. The length of the parallels goes on decreasing as we move from equator towards the poles till it is reduced to zeros at the two poles.

Also called lines of longitude, meridians are imaginary lines which join the poles and are perpendicular to all parallels. They are drawn as semi-circles on the globe. The Meridian pas sing through the Royal Observatory at Greenwich near London is designated as the Prime Meridian or Greenwich Meridian and represents 0°. The exactly opposite to the Green wich Meridian is longitude of 180° and is known as the international date line. The other longitudes are drawn between these two important longitudes. The prime meridian divides the earth into eastern and western hemispheres. Places lying in the east of the prime meridian are said to have east longitudes while those in the west of the prime meridian have west longitudes. Prime meridian (0° longitude) and international date line (180° longitude) are common and are not designated as east or west longitudes.