Origin of the Earth 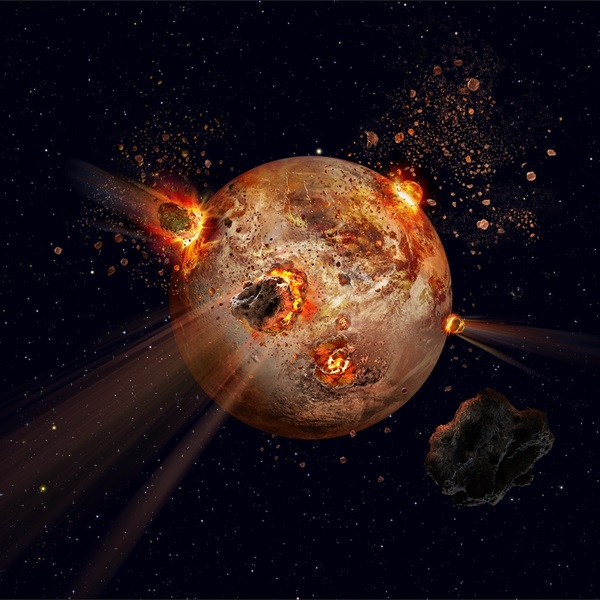 The origin of the Earth is shrouded in mystery and no complete and comprehensive theory about the Earth’s origin has been propounded till now. Most of the theories believe that since the Earth is an important member of the solar system, its origin cannot be difrom that of the other members of solar system. Majority of the theories believe the Earth got separated from the Sun as a hot gaseous mass, which, on cooling with the passage of time, turned into a liquid and then into a solid sphere.

A totally new detion of a planet was accepted by the International Astronomical Union (IAU) on 24 August, 2006 a t Prague in the Czech Republic aer a week long heated debate on the subject. In addition “Dwarf Planet” was redefined and a new term Small Solar System Bodies was coined.

The definitions as approved by the International Astronomical Union on 24th August, 2006 at Prague are reproduced below:

Planet: A planet is a celestial body that:
(a) is in orbit around the Sun.
(b) has sufficient mass for its self-gravity to overcome rigid body forces so that it assumes a hydrostatic equilibrium
(nearly round) shape.
(c) has cleared the neighborhood around its orbit.
(d) should be as effective around the sun as other planets are.
According to the above definition, poor Pluto has lost its status as a planet and is demoted to the status of a dwarf planet

A large number of theories have been put forward to explain the origin of the Earth. Some of the outstanding hypotheses are briey described here.

Professor Imanuel Kant was a German scholar who put forward his hypothesis in 1755. According to him, primordial matter was evenly distributed in the shape of small and cold particles from which our earth and other planets of solar system were formed. Since this hyphothensis is based on gas, it is popularly known as Gaseous Hypothensis.

Laplace was French mathematician who put forward his hypothesis of origin of the earth in 1796. According to Laplace, the primordial matter existed in the form of intensely hot and rotating gaseous mass in the beginning. This hot and slowly rotating gaseous mass was called nebula aer which it is called the nebular hypothesis. As the time passed, the gaseous mass cooled, its volume decreased and its speed of rotation increased. The increase in speed of rotation resulted in increase in centrifugal force. When the centrifugal force exceeded the gravitational force, a ring moved away from the Nebula and broke into many smaller rings. These rings, on cooling became planets and sa tellites. e remaining central part of Nebula is the present sun.

In the year 1900, Chamberlain and Moulton put forward their Planesimal Hypothesis according to which a wandering star approached the sun and exerted its gravitational pull on the sun. As a result, a cigar shaped extension of material was separated from the solar surface. As the wandering star moved away from the sun, the material separated from the solar surface started revolving around the sun and condensed into planets at later stage.

Sir James Jeans, a British scientist, propounded his ‘tidal hypothesis’ in 1919 and another British scientist, Harold Jereys suggested some modications in his hypothesis in 1929. According to this hypothesis, the sun was a gaseous mass in the beginning. Another star, several times larger than the sun, accidentally came close to it and pulled the gaseous material away from the sun due to its gravitational pull. Giant tongues of matter came out of the sun and the planets were formed.

In 1950, Otto Schmidt of Russia and Carl Weizascar of Germany somewhat revised the nebular hypothesis in their own dierent ways. Otto Schmidt in his Hypothesis talked about the large quantities of gases and dust particles scattered in the universe while Carl Weizascar emphasized on the existence of cosmic dust surrounding the sun. The friction and collision of the dust particles led to the formation of disc-shaped cloud and the planets were formed through the process of accretion.