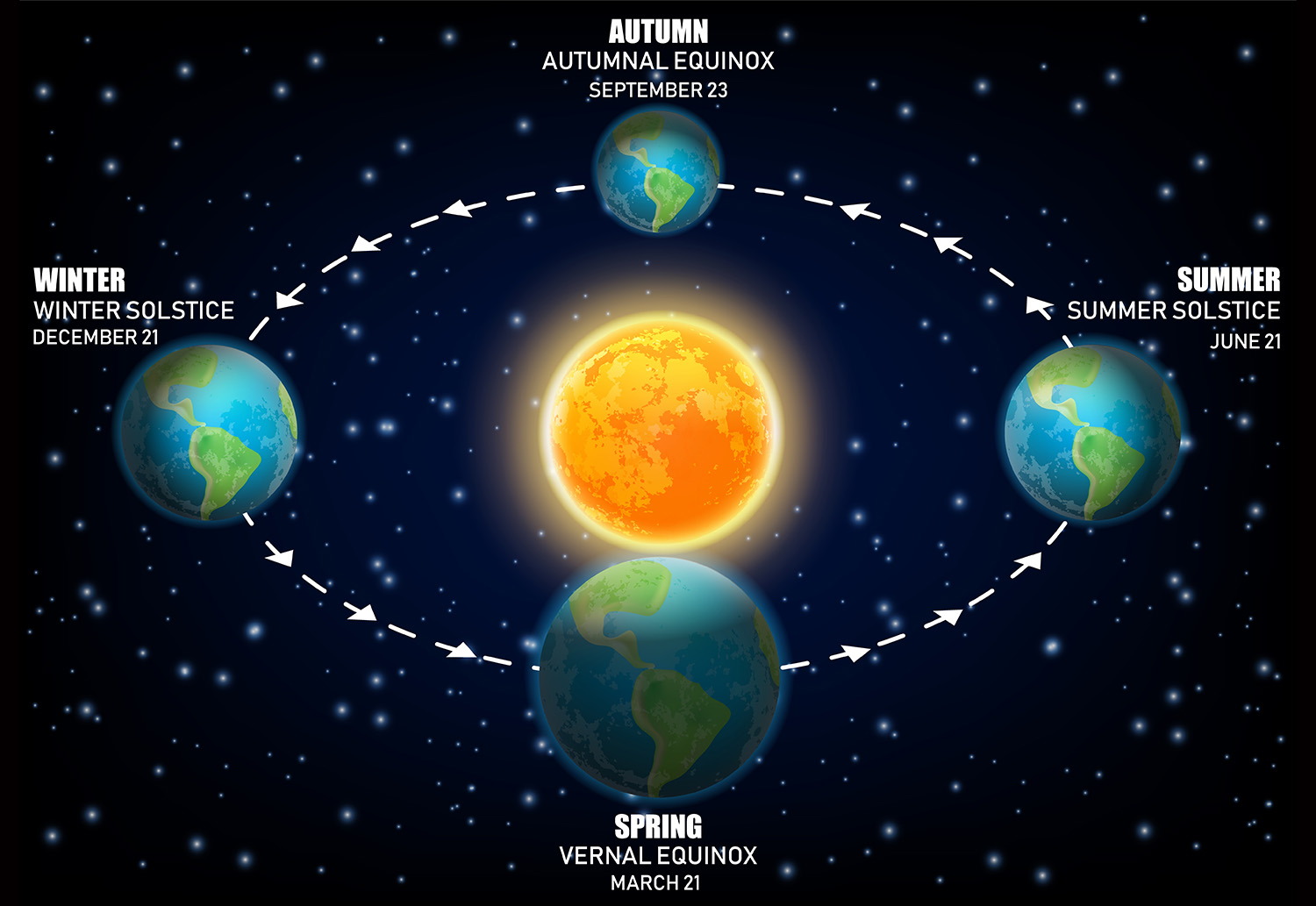 During the course of its revolution around the sun, the earth passes through different phases and occupies different positions. Two of them are known as solstices and the other two are called equinoxes.

On December 21 or 22 the earth travels to the opposite end of its orbit and the southern hemisphere has maximum inclination towards the sun. The sun’s vertical rays are at the Tropic of Capricorn. This is the time of winter season in the northern hemisphere and this position is known as winter solstice. The duration of day light increases towards the south and decreases towards the north. Between in Antarctic Circle and the south pole, the day light lasts for 24 hours because the sun’s rays cross over to south pole and the earth’s turning on its axis through 360° fails to bring any part of this area into the zone of darkness. The duration of day light is 14 hours on the Tropic of Capricorn, 12 hours on the equator, 10 hours on the Tropic of Cancer and zero on the Arctic Circle. The sun rises in the south-east direction and sets in south-west direction.

On March 20 or 21 and September 22 or 23 neither of the two hemispheres is tilted towards or away from the sun and the sun’s vertical noon rays strike the earth at the equator. The duration of day and night is exactly the same, being 12 hours, at all the parallels. s explains the word equinox, from Latin acquus, equal and nox, night. This is the reason that both the equinoxes are treated jointly. However, they are named dierently. e equinox of March 21 or 22 is called the Vernal or spring equinox and that of September 22 or 23 is known as the autumnal equinox.

Variation in the length of day

Length of day changes with season. Although this change is negligibly small near the equator, it is considerably large near the poles.

At the time of summer solstice, the earth’s north pole is inclined towards the sun. The circle of illumination divides the equator into two equal parts and day is of 12 hours duration. As we move away from the equator towards the north pole, larger part of latitudes is illuminated and the length of the day increases. The duration of the day is 24 hours at the Arctic Circle (66½° N). Northern part of Norway lies to the north of the Arctic circle and receives sun light for all the 24 hours. Even at midnight the sun is above the horizon and Norway is called the “land of midnight sun”. The north pole faces the sun for six months and the length of day is six months there. Contrary to this, the sun’s rays are just on the horizon at the Antarctic Circle (66½°S) and the night is of 24 hours duration. The southern pole remains away from the sun for six months and that place has six months long night.

At the time of winter solstice the situation is exactly opposite to the one which prevailed at the time of summer solstice. The days are longer in the southern hemisphere and nights are longer in the northern hemisphere. The southern and the northern poles have six months long day and night respectively. However, equator again has equal day and night of 12 hours each. At the time of equinoxes, the circle of illumination divides all the parallels into two equal halves and days and nights are of 12 hours duration at all places on the globe.