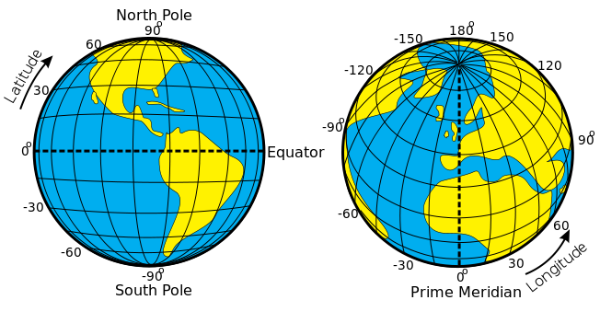 Longitude and time are very closely related to each other. This relationship is based on the earth’s rotation on its axis. e earth completes one rotation on its axis in 24 hours and in the process it sweeps over 360° longitude. Thus for moving 1° longitude the earth takes 4 minutes and in one hour 15° of longitude get rotated. It implies that the time dierence of places located 15° longitude apart will be one hour. Since the earth rotates from west to east, places located in the east gain time while those located in the west loose time. When it is noon at Greenwich meridian, it will be 6 P.M. at 90° E longitude, 6 A.M. at 90° W longitude and midnight at 180° (E and W) longitude.

The use of local time leads to utter confusion with respect to railway, post and telegram, radio; television, air service etc because each longitude has its own time which is different from the time of other longitudes. In order to solve this problem, each country uses some important longitude as its standard longitude. This longitude usually passes through a place of political, historical, economic or cultural importance. The local time of the selected longitude is treated as the standard time for the entire country. The standard time of India is taken from 82½° E longitude which passes through Allahabad at the confluence of Ganga and Yamuna, two most sacred rivers of the country. Thus the local time of Allahabad is treated as the standard time for the entire country and is known as Indian Standard Time (I.S.T.). This is 5½ hours ahead of Greenwich Mean Time (G.M.T.). For the sake of convenience, the standard meridians are selected at 15° interval so that the time differs by exactly one hour.

System of time zones was established by the Prime Meridian Conference held at Washington D.C. in 1884. After a long discussion, the meridian running through Greenwich in England was declared as the prime meridian and was taken as the reference meridian for demarcating the time zones of the world. The standard meridians of time zones were fixed 15° longitude apart from Greenwich, thereby differing from one another by whole hourly amounts. In this way, the whole world was divided into 24 time zones. Each zone has its own central standard meridian called the time meridian.

Time zone map of the world

Some countries or islands lie about midway between 15° meridian. Under such circumstances, a meridian lying halfway between the two meridians is chosen. Such meridians are 7½° longitude apart and represent a difference of half an hour. For example, India’s standard time is based on 82½° longitude which is 75° + 7½° east. Iran’s time is 3½ hours fast and Surinam’s time is 3½ hours slow. Large countries have more than one time zones. The contiguous states of the USA have five time zones. Added to these are those of Alaska-Hawaii (150°W) and Bering (165° W), making a total of seven time zones in all. The erstwhile U.S.S.R. had eleven standard time zones. Australia has three time zones.

International date line is that line of longitude which necessitates the change of date when we cross it. Meridian of 180° was designated as the International Date Line at the International Meridian Conference held in Washington D.C. in 1884. There is a difference of one day on either side of this line because the Greenwich mean time and the time of 180° longitude dier by 24 hours. When we start moving eastward from Greenwich, we gain time at the rate of one hour for every 15° longitude and at 180° E meridian the time is exactly 12 hours ahead (fast) of the Greenwich time. On the other hand, moving westward from Greenwich results in loss of time and at 180° W meridian, the time difference is 12 hours and this time is to behind (slow). Since 180° E and W meridians are represented by the same line of longitude, the total difference of time at 180° longitude is 24 hours. When it is noon of Sunday at Greenwich, it would be midnight of Sunday at 180°E and midnight of Saturday at 180°W longitude.

In other words different dates are found on either side of 180° meridian. Therefore, the calendar date is changed by one day whenever this line is crossed from east to west and vice versa. When this line is towards the east, one calendar day is repeated and when it is crossed towards the west one day is deleted. By and large, the International Date line follows 180° meridian but certain deviations have been made to make allowance for contiguous lands, countries and islands which would otherwise have two dierent dates, thereby creating confusion among the people. Near the Arctic Circle, the International Date Line is deviated in such a way that its eastward bulge passing through Bering Strait avoids division of the easternmost part of Siberia. South of the Arctic Circle, this line deviates westward to allow the Aleutian Islands to be included in the Alaskan peninsula. In the southern hemisphere, at about 5°S latitude, the International Date Line is shied eastward. is avoids cutting through the Ellice, Wa llis, Fiji and Tonga island groups and permits them to have the same day as the neighbouring New Zealand.