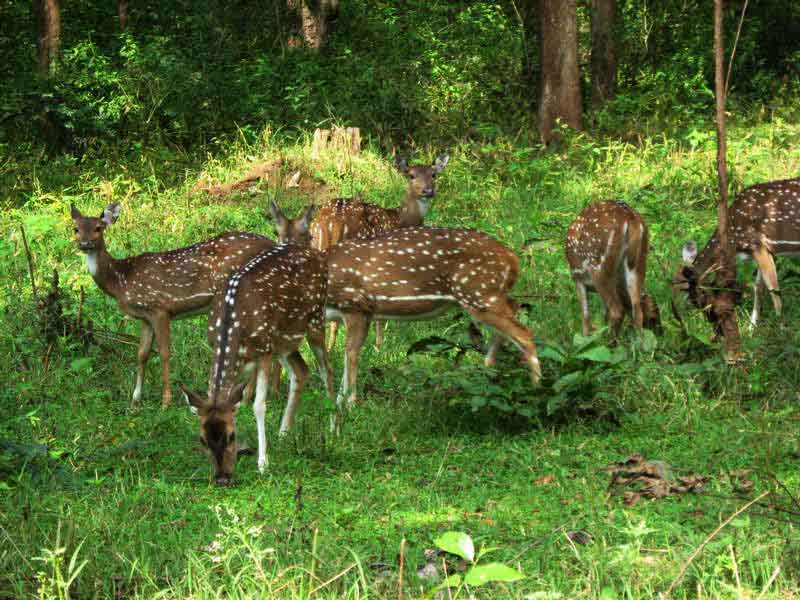 Forest policy was first declared by the British Govt. of India in 1894. With the passage of time and with India becoming Independent country major changes took place. Human and animal population increased at an accelerated rate and made adverse impact on vegetation. Areas which were covered with thick forests are now deserts or semi deserts. Even Rajasthan had forests.

A new National Forest Policy was adopted in 1988 to stop further decrease in the forest cover. e forest policy aimed at: bringing 33 per cent of the geographical area under forest cover, (ii) maintaining environmental stability and to restore forests where ecological balance was disturbed; (iii) conserving the natural heritage of the country, its biological diversity and genetic pool; (iv) check soil erosion, extension of the desert lands and reduction of floods and droughts; (v) increasing the forest cover through social forestry and afforestation on degraded land; (vi) increasing the productivity of forests to make timber, fuel, fodder and food available to rural population dependant on forests, and encourage the substitution of wood; (vii) creating a massive people’s movement involving women to encourage planting of trees, stop felling of trees and thus, reduce pressure on the existing forests.

Based on the forest conservation policy the following steps were initiated:

The term social forestry was used for the first time, by the National Commission on Agriculture in 1976, to denote tree raising programmes to supply redwood, small timber and minor forest produce to rural population.

It is concerned with the raising and management of trees on public and privately owned lands in and around urban centres such as green belts, etc.

Lays emphasis on promotion of agro-forestry and community-forestry.

Is the raising of trees and agriculture crops on the same land inclusive of the waste patches. It combines forestry with agriculture, thus, altering the simultaneous production of food, fodder, fuel, timber and fruit. s involves the raising of trees on public or community land such as the village pasture and temple land, roadside, canal bank, strips along railway lines, and schools etc. Community forestry programme aims at providing benefits to the community as a whole. Community forestry provides a means under which the people of landless classes can associate themselves in tree-raising and thus, get those benefits which otherwise are restricted for landowners.

Under farm forestry farmers grow trees for commercial and non-commercial purposes on their farm lands.

Forest departments of various States distribute seedlings of trees free of cost to small and medium farmers. Several lands, such as the margins of agricultural fields, grasslands and pastures, land around homes and cow-sheds may be used for raising trees under non-commercial farm forestry.

The varied ecological and geographic conditions in India have resulted in a tremendous amount of diverse life forms. Out of a known world total of 250,000 species of plants, about 15,000 species are found in India, and out of a world total of 1.5 million animal species, about 75,000 animal species are in India. Unfortunately, the habitat of the wildlife has been disturbed over the years by the unwanted human activities. Consequently, their numbers have dwindled. Some have become endangered species while some other are at the brink of extinction.

To preserve the vanishing species, the Government of India decided to protect them. The Wildlife Protection Act was enacted in 1972. This Act has given statutory status to the protection of wildlife. This Act adopted by all States except Jammu and Kashmir (which has its own Act), governs wildlife conservation and protection of endangered species. The two main objectives of the Act are; to provide protection to the endangered species listed in the schedule of the Act and to provide legal support to the conservation areas of the country

classified as National Parks, sanctuaries and closed areas. This Act has been comprehensively amended in 1991, making punishments more stringent and has also made provisions for the protection of specified plant species and conservation of endangered species of wild animals. The National Wildlife Action Plan has been initiated for conservation of wildlife. The first National Wildlife Action Plan was formulated in 1983 and a new and renuised Wildlife Action Plan (2002-2016) has been adopted. The Indian Board of Wild, headed by the Prime Minister, was reconstituted in 2001. It is the apex body which oversees and guides various wildlife conservation schemes. At present there are 102 National Parks and 515 sanctuaries.

Was initiated in 1973 with the main objective to ensure maintenance of viable population of tigers in India for scientific, aesthetic, cultural and ecological values, and to preserve areas of biological importance as nature heritage for the benefit education and enjoyment of the people. At the initial stage, this project was launched in nine tiger reserve, covering an area of 16,339 sq. km. Funding support has been provided to 37 tiger reserves in 17 states. An area of 1093.78 sq. km has been notified by U.P. as core/critical tiger habitat. With this 16 Tiger States (out of 17) have notified the core or critical tiger habitat under section 38 V of the Wildlife Protection Act, 1972, as amended in 2006 amounting to 31407.11 sq. km. These states are Andhra Pradesh, Arunachal Pradesh, Assam, Chhattisgarh, Jharkhand, Karnataka, Kerala, Madhya Pradesh, Maharashtra,

Was launched in 1992. The primary aim of this project was to ensure a long-term survival of identified viable population of elephants in their natural habitat. e project i s being implemented in 16 States and UTs viz. Andhra Pradesh, Assam, Arunachal Pradesh, Chhattisgarh, Jharkhand, Karnataka, Kerala, Maharashtra, Meghalaya, Mizoram, Nagaland, Odisha, Tamil Nadu, Tripura, Uttrakhand, Uttar Pradesh and West Bengal and Haryana. Crocodile Breeding Project was launched in 1975. In addition, Project Hangul and conservation of Himalayan Musk deer have also been launched by the Government of India.

Is a relatively large area of one or several ecosystems, that have not been materially altered by human exploitation and occupation. Here, plant and animal species, geomorphological sites and habitats for special scientific education and recreation are preserved. A wildlife sanctuary, similar to a national park, is dedicated to protect the wildlife and concerned species. The network of wildlife sanctuaries, bird sanctuaries and national parks is spread over all the biogeographic zones of the country including Himalayan, peninsular, marine, estuarine, riverine, mangrove and desert ecosystems. National Parks and Wildlife Sanctuaries are further put into five major categories. They are National Parks, Wildlife Sanctuaries, Tiger Project, Project Elephant and Bird Sanctuaries.

A Biosphere Reserve is a unique and representative ecosystem of terrestrial and coastal areas which are internationally recognised within the framework of UNESCO’s Man and Biosphere (MAB) Programme. The Biosphere Reserve aims at achieving the three objectives viz. conservation, development and logistics.

India has designated 17 Biosphere Reserves in die rent bio-geographic regions out of which seven have been included in the World Network of biosphere reserves of UNESCO.