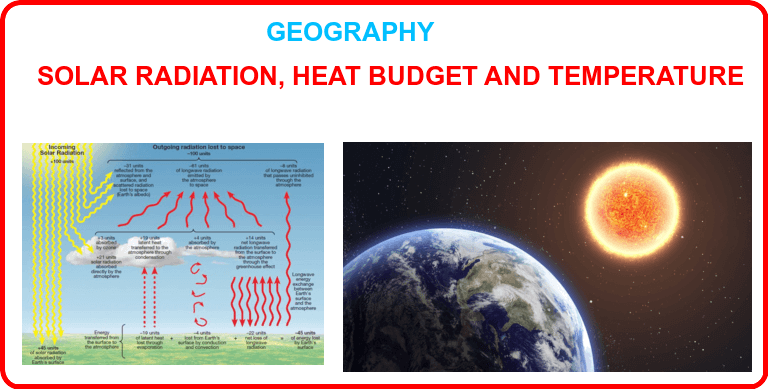 The Earth receives all its energy from the sun which is a hot gaseous mass with its surface temperature at 6000°c. s hot gaseous mass is continuously radiating heat energy into space which is known as solar radiation. But our earth receives a very small percentage of total solar radiation which is only one in two billion parts. This is due to great distance of the earth from the sun (approximately 150 million km). Secondly, the size of the earth is very small as compared to sun. Yet, this small proportion of solar radiation reaching the earth is of great importance as it provides 99.97 per cent of energy to the atmosphere and the oceans.

Solar radiation received on the earth is not the same everywhere, rather it varies from place to place. It is maximum at the equator and minimum at the poles. Following factors influence the distribution of insolation on the surface of the earth.

Inclination of sun’s rays aect the solar insolation at a place in the following two ways . Vertical rays have to heat less area than the inclined rays so that heat per unit area provided by the vertical rays is more than the inclined rays. A, B and C are three equal beams of sun’s rays parallel to one another. But their inclination is dierent at dierent places due to spherical shape of the earth. Beam ‘A’ falls on the equator and is perpendicular to the surface of the earth. Beam ‘B ’falls on the mid-latitudes and is inclined somewhat. Beam ‘C’ falls near the pole and its inclination is the maximum. It is clear that beam ‘A’ has to heat minimum area while beam ‘C’ has to heat maximum area. The area heated by the beam ‘B’ is in between the two extremes. These areas are shown by XY in all the three positions. Obviously, the insolation per unit area is maximum at the equator and minimum at the poles. It has been estimated that sun’s rays inclined at 30° provide nearly half the insolation as compared to those falling vertically.

Thickness of the Atmosphere

Effects of Atmosphere on Insolation

The amount of solar radiation reaching the earth’s surface also depends on the atmospheric conditions. The amount of cloud cover and its thickness, dust and water vapour which determine the transparency of the atmosphere aect the reect ion, absorption and transmission of solar radiation. Atmospheric gases are essentially transparent to visible light, but suspended particles of liquid or solid material can absorb or reect light. A thick cloud may allow less than 10 per cent of sunlight hitting it to reach the earth’s surface. Clouds generally behave like mirrors; they bounce sunlight offen different directions rather than absorbing. Reflected sunlight is permanently lost to the earth. The blue colour of daytime sky is due to scattering of sunlight. But for scattering effect, the sky would be black starry even when the sun is high up in horizon.

Impact of Land and Water

The land and water surface react dierently to the incoming solar radiation. The heat capacity or specic heat of water is five times that of land surface. Specic heat is the energy required to raise the temperature of one gram of a substance by one degree celsius. This means that same amount of heat applied to same mass of water and land result in temperature increase that is ve times greater for the land than for water. If heat is withdrawn from land and water, the temperature decrease will be five times greater for the land than for water. This arises from the fact that water tends to store the heat it receives, land quickly returns it to the atmosphere. Water is essentially transparent, it allows some amount of heat to penetrate to a depth of several metres. Land, on the contrary, is opaque, so there is great concentration of insolation in its upper layer. Further, water always keeps moving and there is missing of heat radiation received from the seen. Moreover, water has higher reaction power of heat radiations than land. The general law may be stated as follows. Land surfaces are rapidly and intensely heated under the sun’s rays, whereas water surfaces are only slowly and moderately heated. On the other hand, land surfaces cool off more rapidly than water surface when solar radiation is cut off. Temperature contrasts are, therefore, more over land areas but only moderate over water areas.

Length of the Day or Duration of Sunshine