Summary of Sufiism and Bhakti Movement 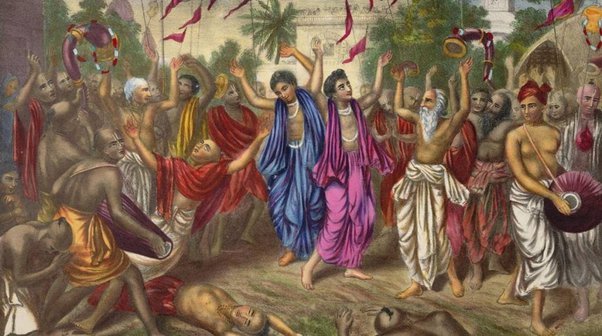 Vaishnavism Among the Marathas

The Maratha school of Vaishnavism or the Bhagavata Dharma has a long history. In the 13th century, the Bhakti movement in Maharashtra was enriched by a number of poet-saints. The most significant of these was Gyaneshwara, a Brahmin, considered to be the greatest exponent of the Maratha Vaishnavism. He wrote a Marathi commentary on the Bhagavadgita called ‘Bhavartha Dipika or Fnanesvari’. Pandarpur was the main centre of the movement he started. The shrine of Vithoba of Pandarpur subsequently became a major focus of the Bhakti movement in Maharashtra. Although the Krishna Bhakti movement of Pandarpur was intimately linked to a temple and a deity, it was not idolatrous in nature. The importance of Vithoba lay in its symbolism. The main features of the Vaishnava religious devotion in Maharashtra, like anti-ritualism and anti-casteism, were similar to those of other movements in the North.

In particular the poet-saints tried to bring religion to the lowest strata of the society. By interpreting the Bhagavatgita in melodious Marathi tunes, Gyaneshwar laid the basis of the Bhagavata dharma in Maharashtra by giving a boost to the Varkari sect which had initiated and instituted regular popular pilgrimage to the shrine of Vithoba (the form of the great God Vishnu) at Pandarpur. Its membership cut across caste boundaries.

This movement in Maharashtra witnessed mass participation by different social groups such as sudras, atisudras, kumbheras (potters) malis, and mahars (outcastes). Some of the saints from the lower strata of society were Saint Choka, Gora Kumbhar, Narahari Sonara and Banka Mahara. In the later period, Namdeva (a tailor by caste), Tukaram, and Ramdas, were important Marathi saints. Eknath furthered the tradition laid down by Gyaneshwar. He shifted the emphasis of Marathi literature from spiritual text to narrative compositions.

Tukaram and Ramdas (Shivaji’s teacher) also raised anti-caste and anti-ritual slogans. Eknath’s teachings were in vernacular Marathi. Tukaram’s teachings are in the form of avangas or dohas which constitute the Gatha. This is an important source for the study of the Maratha Vaishnavism. The Varkari saints developed a new method of religious instruction in the form of Kirtan and the Nirupana. This movement also contributed to the blossoming of Marathi literature. These saints used the popular dialect which paved the way for transformation of Marathi into a literary language. The movement addressed itself to the problems of the kunbis (farmers), vanis (traders) and the artisans.

Chaitanya Mahaprabhu was a popular Bhakti saint living in Bengal. He was a devotee of Lord Krishna and composed many hymns in his praise. He emphasised upon devotional music as the most important means of expressing bhakti. He rejected the caste system and encouraged everyone to join the trend of bhakti through devotional music. He also condemned the domination of the priests.

Mirabai was a Rajput princess and a devotee of Krishna. She composed numerous poems expressing her love for Lord Krishna. She popularised Krishna bhakti through her bhajans. Namdev, Tukaram and Ramdas were other popular Bhakti saints. They opposed idol worship and the caste system.

Summary of Sufiism and Bhakti

Sant Kabir Das (‘Kabir’ means ‘great’ in Arabic and ‘dasa’ means ‘slave’ in Sanskrit) was the greatest among the saint poets of the Bhakti movement. He was born in 1398 at Kashi (Benaras) and was a weaver by profession. He had a very straight forward approach to life. He observed things and commented on situations that we face in our day-to-day life. He had an enormous influence on the development of Hindi poetry.

We have very little reliable information concerning the early life of Kabir, though there is no shortage of legends concerning his life. A legend says that he was actually the son of a Brahmin widow who abandoned him and that he was found and adopted by a childless Muslim couple. His surrogate father was a weaver (julaha) and taught him the weaver’s trade. Some sources say that he never married while others say that he had a wife and two children.

Kabir had very balanced views on both religion and society. He emphasised on the unity of God. Though he called God by different names, God for him was one, the Supreme all-pervading Reality. He emphasised on purity of character and conduct, and surrender to God’s will. He believed that through love and devotion, one could achieve salvation.

Kabir strongly denounced idol-worship, going on pilgrimages, bathing in holy rivers, performance of rituals, etc. He attacked orthodox practices of the Brahmins and the mullahs. In fact, he rejected all the externals of religion and laid stress on leading a simple life dedicated only to bhakti and devotion to God. The religion of Kabir was a “religion of the heart”, open to all. He acknowledged no caste distinctions. Most of his followers were men and women of the so-called low castes. Kabir advocated ahimsa. He encouraged vegetarianism. He also gave importance to a guru. The guru, He believed, showed the right path. He regarded Swami Ramananda as his guru.

Kabir made a strong plea for Hindu-Muslim unity. He strove to achieve harmony between Hinduism and Islam. In this he was the forerunner of Mahatma Gandhi.

Kabir was popular with both Hindus and Muslims. When he passed away, there arowse a dispute as to how his last rites should be performed. The Hindus wanted to cremate his body while the Muslims insisted on burial. There is a legend which says that when the cloth covering Kabir’s body was removed, there were only flowers. The Hindus took some flowers and cremated them. The Muslims took the rest of the flowers and buried them. In Maghar, his samadhi and tomb still stand side by side. Late, the followers of Kabir formed a separate group and began to be known as the ‘Kabirpanthis’.

Kabir’s teachings were purely oral. He never wrote down what he preached. The kabirvanis, the words of Kabir, were transcribed after he passed away. The Kabir Granthavali and the Bïak contain the philosophy that Kabir believed in and preached.

The teachings of Kabir are in the form of short poems called dohas or couplets. The holy Guru Granth sahib also contains over 500 verses by Kabir. Those who follow the holy granth hold Kabir in the same reverence as the other 10 gurus.